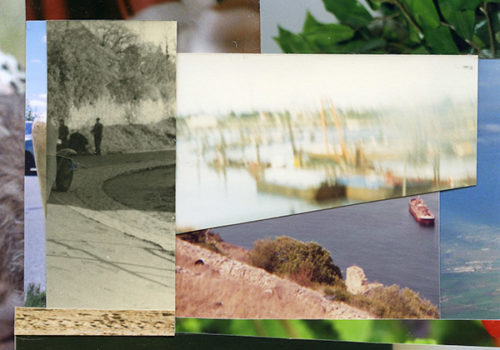 Here is the interview with Lilly Lulay by Sophie Bernard in the context of our coverage of the festival Circulation(s). With her series « Mindscapes » Lilly composes imaginary landscapes from private snapshots either found or purchased, she creates a world where colour and black and white, the urban and nature are mixed together in the form of photo collages.

Why did you become a photographer ?

Photography interests me as a kind of artistic expression, but, what especially interests me is that it plays a role in daily life.  These days, everyone is a photographer thanks to cameras integrated into cell phones and computers.  The world is flooded with images.   I’m thinking of images from surveillance cameras present in the urban environment.  We are surrounded by photography, which could range from being in private, public or virtual spaces.  In my work, I use images produced by others.  I question the social character of the medium as well as the effects that photography can have on our perception of the world, be it individual or collective.

Do you do photography for living ?

During the end of my studies, I started being in galleries (Ilka Bree in Bordeaux, Kuckei + Kuckei in Berlin).  Today, this is what allows me live off my artistic work.

Have you ever published a book ?

I just published a piece focusing on my photo-collage series Mindscapes which is exhibited at the Circulation(s) festival.  It’s a series of unique pieces that I pursued since 2007.  These collages develop and transform by interacting and reacting with other projects which I work on in parallel.

How did you find Circulation (s) ? Why did you choose to be candidate ? What do you expect of this festival ?

I met Carine Dolek, who talked me into applying, during portfolio reviews in Hamburg.  I’m very happy to participate in the festival and, thus, to be able to exchange with young European artists and the entire Circulation(s) team and more, I hope.

Can you introduce your series ?

The initial idea behind the series is to make a painting with the photos.  I used colors and structures that I extracted from archival images (intimate and anonymous photographs from different contexts and eras).  I do not believe that one image carries one particular message or has a meaning in itself.  It’s the context and the person who is looking at it which gives the image its meaning.  That’s from where the title Mindscapes comes.  These colleges are an attempt to represent and visualize a space to which one cannot have access with a camera- the mind.  It’s there where the images are really produced.  Mindscapes offers several different images and makes reference to multiple realities at the same time.  Seen from afar, one perceives landscapes and urban scenes; seen from close up, one notices that Mindscapes doesn’t offer at all a coherent representation of reality, but visual fragments which are inserted, superimposed, partially hidden… In this way, Mindscapes takes over the structure of memory and reveals that the viewer constructs the image from his or her own knowledge and personal memories.

Can you describe how you study or prepare the subject before shootting ?

Collect pictures wherever I go.

Who are your masters (photographers, artists…) and why ?

There are a lot of artist in the domaine of photography and collage… artists like Dada Hanna Höch, George Grosz and Kurt Schwitters particularly interested me during the beginning of my art studies.  Then, as my work became more conceptual, I started to be interested in the picture generation and its way of using visual media and reflecting upon this field.  Camille Henrot’s “Grosse Fatigue”, which I’ve recently seen, left a deep impression on me.  Finally, theorists like André Gunthert, Philippe Dubois, Walter Benjamin, Bernd Stiegler and Hans Belting have a strong influence on my way of approaching and treating the photographic medium.

The 6th Edition of Circulation(s) Begins