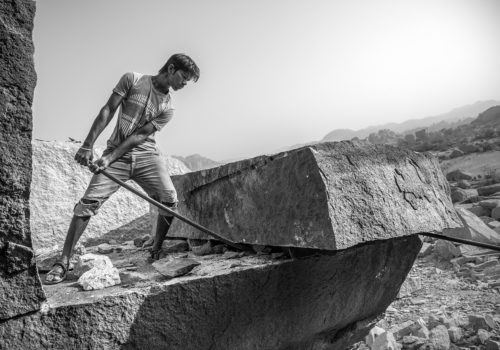 For the sixth year in a row, the Chroniques Nomades festival will be held in St Germain Abbey in Auxerre until October 31.

It is Fabien Dupoux that we have chosen to present to you with this text by Claude Geiss, the artistic director of the festival!

Asia (s): Between hope and oblivion

While on a planetary scale, trade flows are increasing in an unlimited way, the share of Asia in these exchanges is always more important to the point of shifting the center of gravity of the world economy towards the Pacific zone. Object of questioning, fascination, admiration or worry, this continent, which gathers more than half of the world’s population, gives rise to a multiplicity of photographic works and researches which illustrate its geographical diversity, the inequality of its economic development, or testify to its cultural richness threatened sometimes by economic modernization and sometimes by political will.

This 2021 edition of Chroniques Nomades brings together a collection of works that touch on this economic role of Asia, its threatened cultures or, in a more intimate way, the personal links that can be established between it and Europe.

Thus, Fabien Dupoux highlights and honors “the forgotten of globalization” who, at the origin of most of the world’s wealth, work in conditions that seem unchanged for centuries.

In Tibet, where Jacques Borgetto stayed for a long time, it is through political will that the local culture is endangered; the photographer gives us a portrait of a changing country that has nevertheless remained “close to the sky”. In Mongolia, the South Korean Daesung Lee stages the nomadic way of life of the shepherds doomed to quickly disappear under the effect of desertification; while in India Deidi von Schaewen strives to continue the tradition of Hazaribagh woman painters, which is being lost under economic pressure.

Through family histories and migrations, emotional ties are created, echoes between regions of the world that nothing a priori brought together: thus, in a back and forth game, Naïade Plante brings India and Normandy into dialogue, revealing the secret connivance between these two worlds while Thi Nhan Nguyen offers an emotional and surprisingly homogeneous vision of his family universe in Vietnam or Toulouse, his hometown.

It will be understood, we will not find here a portrait of Asia, but a few touches of a sketch to capture a moving subject, a range of photographic approaches of an entity that is always slipping away.