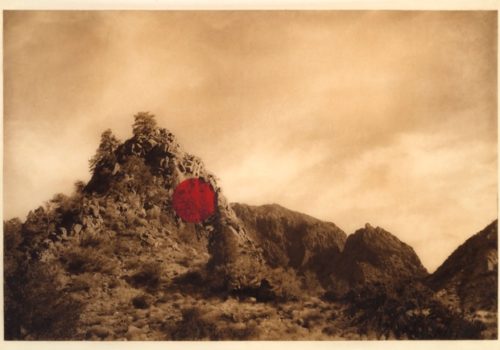 Christa Blackwood is a photo, text and installation artist working on themes relating to identity, history, and popular culture. Her series, Naked Lady: A Dot Red is currently on exhibition at the Center of Fine Art Photography in Colorado and runs through July 27th, 2013. This work will also be featured in Unbound 2 at the Candela Gallery in Virginia opening July 5th, 2013 and was exhibited in this summers Geografica at La Fototeca, The Center for Contemporary Photography in Guatemala City, Guatemala.

Naked Lady: A Dot Red, a series of tri-mono print photogravures, examines and modifies the vernacular image of the “figure” in a landscape to address the ubiquitious use of the female form in art and culture.

Blackwood was a student at New York University when she began producing street installation art such as Butcherknives (1991), a work that addressed issues of sexual violence. A chilling juxtaposition of billboard-like close-ups and text from poet Michelle Kotler, Butcherknives, was plastered all over the streets of lower Manhattan on the evening the William Kennedy Smith verdict was announced. The poster’s timely and provocative appearance resulted in heightened critical attention for Blackwood, including an invitation to join the Women’s Action Coalition (WAC) from renowned artists and scholars, Kiki Smith and Lucy Lippard.

She has studied with the photographer, educator and MacArthur Fellow, Wendy Ewald, at the Center for Documentary Studies at Duke University. She was particularly drawn to Ewald’s focus on utilizing the camera for “helping children to see.” These experiences informed her work as Founding Director of The Children’s Photographic Collective, established in 1995 to increase children’s awareness and understanding of culture through photography.

Her dream-like sequences and texts employ multiple techniques and methods, fusing traditional, historical and alternative processes with contemporary practices such as iPhone image-making and street installations. Thematically and stylistically, her works draw from Surrealist theories and practices, Pop Art and its engagement with film stills and print ads, and the candid intimacy of family portraiture.

Blackwood received her MA in Studio Art from New York University and a BA in Classics from The University of Oklahoma. Her work has been featured in several publications including The New York Times, NYQ, New York Newsday, The Village Voice and The Chicago Sun Times. She has exhibited in galleries and museums throughout the U.S. and abroad.