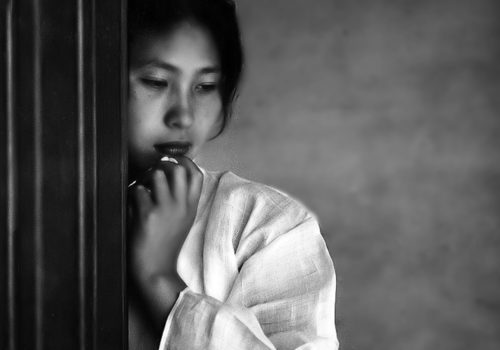 Koreans is one of the doyennes of the work of Chris Marker featured this year in Arles, telling a story through images and text of a trip to North Korea in the late 1950’s. A walk through the everyday life of people that despise today’s keyhole journalism.

In 1957, Chris Marker was one of the only journalists to enter North Korean soil. The country was in reconstruction and recuperating from a civil war with the South, while the USSR and the USA thought it was worth while to fight on the land of morning calm. Any other western correspondent would have been tempted to cover the state of the country with a political approach, make an assessment of the serious events over the last four years or inform on the situation over the region.

Marker is a different kind of reporter. During his trip, he became very fond of the individual stories. Koreans depicts a society and its everyday life, without really dividing between North and South, both crafters of a history and of a common culture. Marker wanders, talks and photographs these people in their traditions, most of the time away from the big cities, trying to understand this up to now hidden and misunderstood society. The North Korean regime already applied authoritarianism, but here, no military junta or show in uniforms.

The images of this world –even today very isolated- become timeless, as the country has not evolved technologically over the last decades. Even if Marker is more a philosopher than a wheedler, he dwells on the emotion of the subjects, capturing their endearing life portraits. Avoiding common places, he tries to penetrate the Korean soul, and transcribe in photographs and text –as the artist masters both arts- with poignant accounts such as the one of the little girl, her face covered in tears, whose parents were both dead during the clashes.

Deeper in the countryside, the women adopt a thoughtful attitude, young girls get ready to dance and the children, under their watch, offer them an improvised show. Little scenes tainted with tenderness and humor, that in the wake of the war help in discovering not an apathetic people, but a culture wishing to live on and ready to find peace. In this sensitive work, Chris Marker will never use the word “North-Korean”. He will force himself, skillfully, to consider Koreans united with inalterable ethnic links.

However, this work will be banned, on both sides of the border: in the North, as the author does not adapt to the cult of Kim Il-sung, the great leader of the country; in the South, just because there is no interest in referring to the communist contender. As epilogue of his book first published in 1959, a few months before being discovered with La Jetée, he wrote: “At the end of this trip, there is human friendship. The rest is silence.”

Koreans by Chris Marker. Originally published in 1959 and reissued in 2009, as a part of the large retrospective that is featured in Arles this year.
From July 4th through September 18th, in the Palais de l’Archevêché
8 Boulevard Lices
13200 Arles
04 90 43 35 10