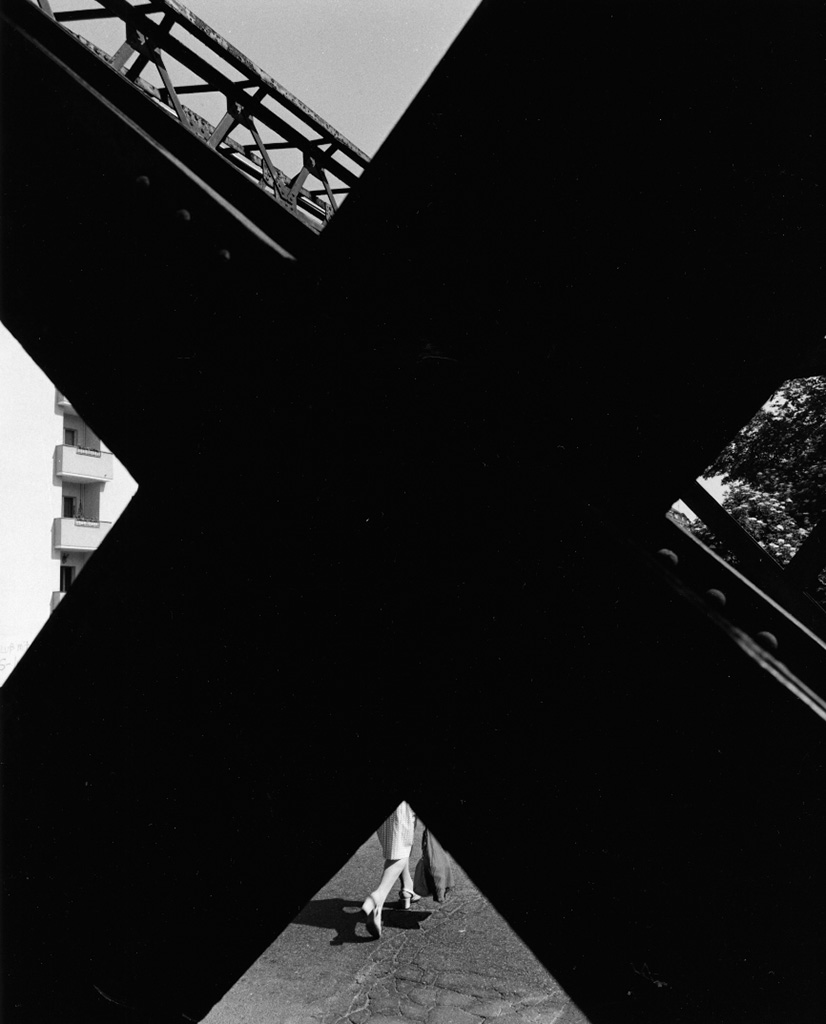 This winter in Chicago, two exhibitions are dedicated to the American photographer John Gossage. The first one, presented as “a retrospective in a room”, is organized by the Art Institute and titled Three Routines; the second, Two Routines, is held at Stephen Daiter Gallery. Titles of both exhibitions could suggest a repetition, a dull mechanism. In fact, they refer to the diversity of photographic strategies and routines in the art of John Gossage. From everyday life situations, characters and places, he has been creating complex photographic narratives through his Series.

In the Art Institute’s single show room, the most recent series of the photographer, The Guggenheim Project, is being confronted to well-known series such as Berlin in the Time of the Wall or The Romance Industry. The Guggenheim Project was realized between 2010 and 2014 with the prestigious Guggenheim Foundation Fellowship. John Gossage traveled all over the United States and brought back a series of black and white prints depicting his country from portraits of American citizens to random places. Individually mounted on cardboards and numbered, these photographs could be part of documentary archives. Yet, the photographer never introduces spatial, sociological or cultural landmarks. National symbols, such as the Statue of Liberty, are no more than a shadow in John Gossage’s photographs.

So far, the artist has been taking pictures in limited and often foreign areas. For There and Gone, he is photographing on the beach of Tijuana in Mexico; Berlin in the Time of The Wall is taking place in Berlin; The Romance Industry in Marghera, a desolated industrial area located across the lagoon from Venice in Italy. With these series John Gossage is established as an anthropologist of the ordinary.

In his work, objects, places, situations are also clues, traces to build a photographic memory of past and contemporary history. Starting in 1982, John Gossage walked and took photographs along the Berlin wall that used to divide the city in two parts. The brutal architecture, the barbed wire, and the darkness of the Berliner night are revealing the tension between an environment carrying the weight of history and cut off from its own inhabitants. In Heyfuckface, the artist is photographing isolated and abandoned areas in New York State with no memories left. In Italy, in front of a white background, the artist exposes industrial objects found in Marghera and reactivates a memory. In The Romance Industry, ordinary objects are suddenly vivid, absurd, and are even transformed sometimes as works of art.

The virtuosity of John Gossage also deals with his capacity to change from a photographic form or style to another. Stephen Daiter gallery chose to confront exclusively two series on its wall, Pomodori A Grappolo and Berlin. The first one is made of vibrant color images, the second displays very dark prints that are sometimes difficult to read.

The choice of the title “Routine” for both of these exhibitions shouldn’t surprise us. John Gossage is using photography as a mastered routine. He gathers, records, and sequences memories from our contemporary world. The only regret the visitor could have is the absence of the remarkable Series The Pond in these exhibitions. Starting in 1980 to take photographs around a pond in the area of Washington D.C., John Gossage succeeds magnificently to question the relationship between environment and man, between inhabited and abandoned places, through a photographic march both literally and figuratively.