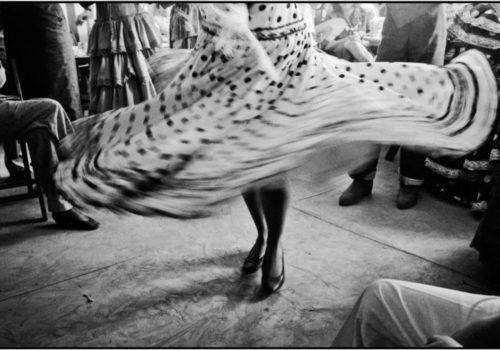 On the occasion of this year’s Berlin Photo Week, Chaussee 36 showcases an exhibition to commemorate Magnum Photos´ 75th anniversary. Dancing through Times of Uncertainty presents the works of Magnum photographer Inge Morath (1923-2002) and Johanna-Maria Fritz (*1994), recipient of the Inge Morath Award.

The photographs selected for this exhibition present a more complex perspective than the images we know from our news channels of countries such as Iran, Afghanistan and Palestine. Inge Morath and Johanna- Maria Fritz’s photographed performers- jugglers, clowns, musicians and dancers in countries known for their political conflicts and difficult living conditions. Arts and entertainment meet a harsh reality. We see people mourning by a grave at a refugee camp. We also see armed soldiers surveilling the Gaza strip, yet a colourfully dressed clown on stilts looks back at them holding his juggling pins. Creativity and freedom of expression can also be found in harsh environments.

Inge Morath was one of the first female photographers to become a full member of Magnum Photos. She documented everyday life on the streets of numerous countries, particularly Iran, throughout her career as a photographer. Her subjects included musicians, dancers and other artists. The exhibition assembles some of the photographer’s iconic works as well as her lesser-known works. The photographs, most of which were taken in the 50s and 60s, carry a timeless aesthetic that is simultaneously gentle and energetic.

Johanna- Maria Fritz, young photographer of the Ostkreuz Agency, repeatedly meets people who are trying to build a life for themselves despite war and oppression: Her long-term project „Like a Bird” (2014-2019) documented circus culture in Muslim countries. She recorded the artist´s quest to create a space of freedom for themselves and their audiences. One of Fritz´s younger subjects from Gaza describes feeling “like a bird” in the circus. According to Fritz „The circus is a place free of religion, nationality or skin colour – it is a refuge in times of uncertainty or conflict”.

The exhibition takes the viewer on a journey through different countries, and can – in the current socio-political climate serve as a reminder: Art has the power to provide safe havens and encourage resilience in people during times of hardship.