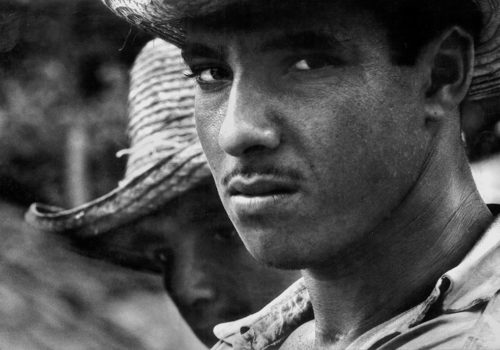 The Image Gallery Redux show at Howard Greenberg’s gallery takes me back to my very beginnings as a photographer. The Ladies Aide picture was made when I was seventeen and taking a workshop with Russ Lee and Roy Stryker in Rolla, Mo. It also includes three pictures from a migrant farm workers story I did for a magazine called Jubilee where I worked when I got out of college in 1956.

On New Year’s Day, l959, news broke that the Cuban dictator Batista had fled to the Dominican Republic with all the money he could grab and that Fidel Castro’s rebel armies were advancing on Havana. Castro, a 32 year old lawyer and revolutionary, had won. That day, I got a call from a woman who had seen the pictures of mine on Puerto Rican migrant farm workers and liked it. She was affiliated with Castro and organizing a project, Operacion Verdad, inviting non Cuban artists, writers, sculptors and dancers, to go to Havana and “create works related to the revolution”. Expenses only: room, board and transportation. I jumped at the chance. I spoke no Spanish. It didn’t even occur to me until I got to Havana that there might be a problem.

On January 2nd, I arrived in Havana was taken to Revolucion, Castro’s newspaper, where I was assigned to an English speaking reporter. Our immediate job was to join up with Castro in the Sierra Maestra. We flew out on a military plane to god knows where in the mountains. Castro was saying goodbye and thanking his supporters before leaving for Havana. It was a very solemn moment. The emotion was palpable. There were many farm workers dressed in their Sunday best, and many bedraggled soldiers all drawn to the edges of a soccer field around a respectfully empty space. The only place to get a photograph was in the middle of the field. I didn’t want to disrupt the moment. Besides, I wasn’t sure I could pick out Castro: ALL the soldiers had beards. I shot from the edge of the field. I was 23 and clueless..

Afterwards, I couldn’t find my reporter, so I hitched a ride back to town with a Cuban reporter and, after beer and a sandwich in a cantina, settled down on a bench in the plaza, waiting to be found.

I was found by a cop, who eyed my Revolucion pass and hauled me off to jail. I was put in a cell because no one could believe that an American who couldn’t speak Spanish would be working for Revolucion.

At midnight, everyone was rousted out of their cells and set free. The Cubans went home, I guess, and I settled down on the same bench and wrapping my camera straps around my arm, went to sleep. With all the adrenalin pumping through me, hunger wasn’t an issue.

Sometime later, a young and pretty woman woke me and asked if I was all right. She turned out to teach English at the local school. She heard out my story and invited me to come for breakfast the next morning at her house across the plaza.”Come at ten,” she said, “after my mother’s gone to work.”

At 9:30 am, a half hour before my tryst, the reporter showed up to say we had to hurry to the airport: the plane was leaving. “Mierda,” I said, my first Spanish word.

So much for my first day in Cuba. I had never seen a dead body before, never been in jail, never covered a major news story, never slept on a park bench and never had a beautiful woman invite me to her house when her mother was gone. This was living.

Havana was exhilarating. People my age were arguing until dawn about how their new government would achieve universal literacy and medical care, fair land distribution, social justice and a new role for dance. I was full of the romance and hope for a just and equitable world that a revolution incites. If being a photographer could bring me to all this, I would become one.