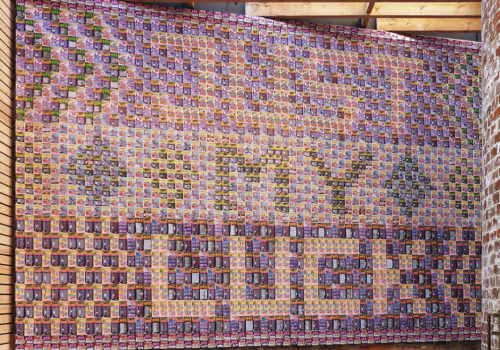 They are two: Katherine Longly and Cécile Hupin; They are fascinated by the world of lotto. Their exhibition entitled Just My Luck is held in Brussels until April 16th.
Katherine Longly presents it as follows:

After several years of work and investigations with my sidekick Cécile Hupin, we are ready to unveil the first part of this project which questions our belief in luck and our relationship to the dream of money.
Human beings have always dreamed of the small miracle that could change their lives. The invention of lottery games, more than 2000 years ago, tipped the pure fantasy into the realm of the achievable. It would therefore only take a little luck to see all our dreams come true. But what is luck? And isn’t this notion of luck inextricably linked to that of bad luck? As if to believe in one was to risk activating the other…
Katherine Longly

Just My Luck 03 and Just My Luck 04: Thirty friends had been playing the same Euromillions numbers every week for years. When there was a little money missing in their kitty, the person in charge of validating the ticket completed the bet. But one day, she had had enough and decided without telling the others, to play other, cheaper numbers. Their usual numbers came out precisely that night. The thirty friends, thinking they had won 30,000,000 euros, partied and shot the stars for 30 minutes before discovering that there were no top winners and that they had just passed by the jackpot. © Katherine Longly & Cécile Hupin

Just My Luck 05: One of the members of the group of friends (cf. 3 and 4) thinking he had won, almost destroyed his apartment with an axe, thinking he would be able to afford a much more comfortable place. © Katherine Longly & Cécile Hupin

Just My Luck 06: Ahmed Allay, whose life was shattered the day he was sent to prison, accused of forging a winning lottery ticket. He then devoted the rest of his life gathering evidence to prove his innocence. © Katherine Longly & Cécile Hupin

Just My Luck 07: Eight hundred letters from anonymous people asking for financial help, received by a bookseller, asking him to forward them to a big winner who disappeared in the wild. © Katherine Longly & Cécile Hupin

Just My Luck 08: Juliette, iconic café owner and lottery winner. She tried to delegate the management of her bar but that didn’t last a week, because the customers came mainly for her company. She therefore continued to work but bought an apartment, renovated her café and made her loved ones happy. She also bought herself an armchair in the shape of a stiletto heel. © Katherine Longly & Cécile Hupin

Just My Luck 10: During a lotto draw, Marc saw his 6 numbers come out! However, a few hours later, the draw was invalidated because balls 41 and 42 had become stuck in the machine. Marc then fought for several years to recover his gain, separating from his companion and his loosing health. © Katherine Longly & Cécile Hupin