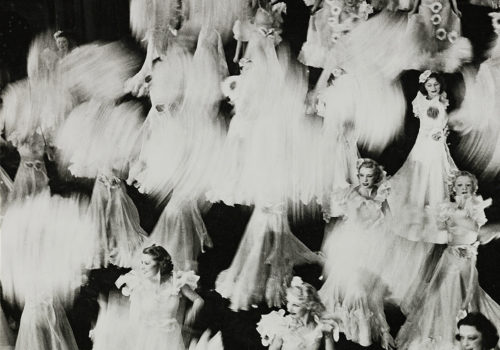 Gaston Paris (1905-1964), a talented photographer and assiduous who was frequently published, notably in VU magazine, remains largely unknown. A virtuoso technician and ingenious observer, he and his peers catered to the visual appetite of the 1930s. The exhibition entitled “Gaston Paris“. “Photography on show“ invites us to rediscover the importance of this photographer who was undeniably influenced by Surrealism and the “social fantasy“ of his day. The exhibition also reviews the different supports for photography: it presents some fifty period prints, twenty-five thematic plates illustrated with contact prints, fifty reproductions from magazines, more than one hundred late prints made in the 1960s and 1970s, with the projection of somehundred digitised negatives.

From music hall girls to the children of the famous Paris “zones“, including the aerodynamic wind tunnel at Meudon, Gaston Paris documented the shows and modernity of the 1930s with ease and professionalism, making his Rolleiflex camera’s square format a rich catalogue of forms and signs for the editors of illustrated magazines. In this sense, the exhibition sheds light on the nascent practice of photojournalism, particularly on some of the major subjects favoured at the time. It presents the exemplary career of a reporter who, while continuing to work for VU, contributed to magazines as varied as La Rampe (on theatre, film, the artistic scene), Paris Magazine (with an erotic tendency), Match (reportages on sport in the early days, then increasingly on political subjects).

In 1940, he contributed, like other French photographers, to the magazine La Semaine, controlled by the Vichy authorities, to reappear later as a witness to the Liberation of Paris and then of a destroyed Germany, where he accompanied the French troops.

Gaston Paris never published a book during his lifetime. In 1952, he tried to publish Les Mystères de Paris, a selection of photographs gathered in a book, but the project did not succeed. The time was no longer ripe for the image of a mysterious and obscure Paris, but of a city imbued with a gentle existential melancholy. This failure embodies the tragedy of Gaston Paris’ artistic career: he arrived too late compared to his fellow reporters who preceded him with their formal inventions, but too early compared to a post-war generation whose vocabulary he did not share the humanist vocabulary.

For more than twenty years, photography historian Michel Frizot, collected various documents and works by Gaston Paris. The Kandinsky Library, to which his collection of printed documents and periodicals was donated, now preserves a large number of issues of VU. This collection of period originals was completed by the Gaston Paris collection from the Roger-Viollet archives, which received some 15,000 of the photographer’s negatives following his death in 1964. These collections contribute to a better understanding of an era divided between the glare of the stage lights and the spotlights of the 1940s curfews. Visual culture was as much a part of the modernity of those years as the frenzy of the shows, as the title of the exhibition and its catalogue, “Photography on show“, underlines.

“Gaston Paris. Photograpy on show“ is part of a series of exhibitions organised by the photography department of the Centre Pompidou, offering a new look at photography in the 1930s, partly made possible by the unprecedented acquisition of over 7,000 photographic prints from the Christian Bouqueret collection in 2011. Among them, the great “Henri Cartier-Bresson“ (2014) retrospective which dealt, among other things, with his political commitment, and the thematic exhibition entitled “Photographie, arme de classe“ (Photography, a class weapon, 2018), and soon in autumn 2022, the exhibition “Décadrage colonial“.

A cooperation between the Centre Pompidou, department of photography, and the Bibliothèque historique de la Ville de Paris.

In co-publication with the Centre Pompidou