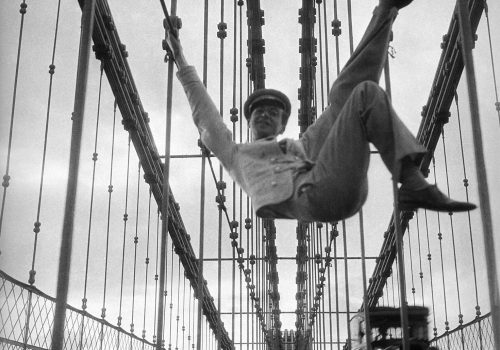 Designer, fashion guru and aesthetic visionnary, Cecil Beaton is still photography’s reigning exemplar of elegance. An exhibition and a momentous new book, Cecil Beaton: The New York Years, look back on the American career of one of the great portrait photographers of our time.

When Cecil Beaton first arrived in New York in 1928, he was a laughing stock. While the majority of his colleagues worked in fully-equipped darkrooms, Beaton had his pictures developed at the corner drugstore. But his amateurish appearance could only mask his talent for so long. Beaton paid little heed to the technical aspects of photography. He did, however, have immense trust his eye—an audacious, inspired eye, all attitude. James Danziger, a New York gallery owner and a preeminent scholar of Beaton’s work, believes that what separated the photographer from his contemporaries was his ability to work wonders with the most meager equipment In an ostensibly modern era still clinging to its methods, Cecil, never a good student to begin with, forswore all pretensions to conformity, and in doing so became, Beaton.

The Englishman was, in the model of Jacques Henri Lartigue, an instinctive photographer. He took an interest in the art of photography and its secrets. By age 11 he already owned a small Kodak, a basic camera that he would continue to use into his early years in New York. Raised by two sisters, they would become his first and favorite subjects. There he first discovered his love for the beauty of the human face, a pursuit that would occupy the rest of his career.

He first made a name for himself while studying at Cambridge, publishing in Vogue UK a series called Bright Young People, which depicted a group of young Bohemian aristocrats whose behavior flouted the conventions of British high society. Even if his pedigree precluded him from ever becoming a part of the upper classes, he nonetheless joined their ranks after moving to London.

Obsessed with class and status, he dressed his models and placed them in original settings, always with style and elegance, always with a passion for beautiful girls and their gaze. The fabric was bespoke. And beyond the style there was humor, too: a model’s head peeks coyly out a hatbox. His portraits of English celebrities of the era first caught public eye. Vogue tempted him with a string of projects, but, bewitched by visions of the New World glimpsed through the father’s business travels, Beaton declined. In November 1928, he took to the sea.

From one ship to another

On the eve of the Wall Street Crash in 1929, New York was still roaring much as it had throughout the decade. Over the course of 50 years, Beaton spent long holidays—several months a year—in Manhattan hotels, piecing a rich social and professional life. New York provided what London never could: a cosmopolitan life, a host of magazine opportunities, and above all the opportunity to unleash this exuberant energy that he had been reigning in since his youth. The town would become his second home. He must have found inspiration in its unfailing ability to reinvent itself.

And Beaton didn’t lose any time doing just that. Barely off the boat, he found himself having tea with one of the city’s most influential theatre producers, Elisabeth Marbury. Even more important more his career, Beaton scored a meeting with the editor of American Vogue, Edna Woolman Chase, who had been keeping an eye on Beaton’s work since his London years. It was the start of a love story between the photographer and the magazine that would not only create its own stylistic school in fashion, but also influence the artistic avant-garde and the nascent French Surrealism.

Following on this success, Condé Nast, the publisher of Vogue and its smaller sibling, Vanity Fair, presented Beaton with a camera worthy of his talent. He retired his amateur Kodak camera. Now Beaton, armed with a modern 8 x 10 large-format camera, found himself rubbing shoulders with Hollywood’s biggest stars, on movie sets and in luxury hotel rooms. This change of scenery failed to undermine his eccentricity and theatrical style. In his mischievous way, he would seek out originality wherever he shot and in whomever he was shooting, indulging his creativity at the risk of unnerving his subject. Jean Cocteau nicknamed him, “Malice in Wonderland.”

His accomplices included Marlene Dietrich, Audrey Hepburn, Marlon Brando and Mick Jagger. Beaton recalled a session with Marilyn Monroe where: “She was jumping on the sofa, squealing with delight.” According to James Danziger, “He could adapt to any environment.” The modest celebrity and social grace that Beacon’s profession afforded him put his subjects at ease, instilling in them a sense of confidence from which he could tease out an aspect of their personality. This was the quality that eventually made him the official photographer of the royal family. However, not all of his photos have to be so dramatic; they can simply be pleasant to observe.

Like all the great portraitists, this enigmatic photographer had a secret. He could forge an instant complicity with his subject. Behind the gazes of all the faces he immortalized lies his mischievous, tender own. “He developed a strong feeling for his subjects,” says James Danziger. Every relationship, delicate or not, is a struggle of emotions, which makes possible pictures of refined aestheticism, simultaneously singular and romantic. His portrait of Audrey Hepburn, her hair cut short, her palm flared out in front of her black dress, demonstrates that style is a question of attitude. With Beaton’s touch, one can’t be sure if the snap was posed or candid.

Of all the women that Beaton knew, Greta Garbo was his muse. His portraits of her stand out in his archive. “He worshiped her celebrity and the aura it created around her,” explains Danziger. Their relationship ended came to end after Garbo invited him to her house to photograph her for her passport. He subsequently sold other pictures from the session to a magazine. Beaton was also known for his ambiguous sexuality; women weren’t his only inspiration. He frequented the gay intelligentsia of his time—notably, Truman Capote and Jean Cocteau—and suffered an acute (albeit unrequited) passion for Mick Jagger, whom he met in March 1967. For more than a decade, their close relationship would produce a series of remarkable photographs. Beaton described the singer in these terms: “Masculine and feminine, beautiful and ugly, he was for me the very image of forbidden passion.”

After end of World War II, the theatrical style that Beaton had developed seemed out of place in an era more demanding of reality and “the now.” The 1950s would be a turning point in his career. “His photos became less rococo. They were clearer and less fraught,” said Danziger. He was soon enough dethroned by the new school, that of Penn and Avedon, whom Beaton humbly admired, even collecting their work in his scrapbooks. As a photographer of boundless talent, Beaton adapted easily enough to new trends without abandoning his style. But now he was nourishing another dream.

Always a champion of the fictional, Beaton reinvented himself yet again and launched himself into the theatre and cinema. He designed the costumes for The Portrait of a Lady (1954), English and French ballet, and even found himself on stage. In 1956, he won the Oscar for his work on My Fair Lady (1956) all while continuing his photography, as in his portraits of Julie Andrews. “I doubt that I will ever be able to completely abandon photography,” he said about this turning point in his life.

In the 1960s, he rejoined Vogue UK as their house photographer covering Hollywood, which brought him back among its stars. Until the end, Beaton never shunned new means of expression in the arts, a mentality that would be shared by Andy Warhol and his Factory entourage. A beacon of elegance, fantasy and the beautiful, Cecil Beaton remains to this day the child prodigy of a renaissance. His work is a testament to the belief that vulgarity is not, in photography, a virtue.