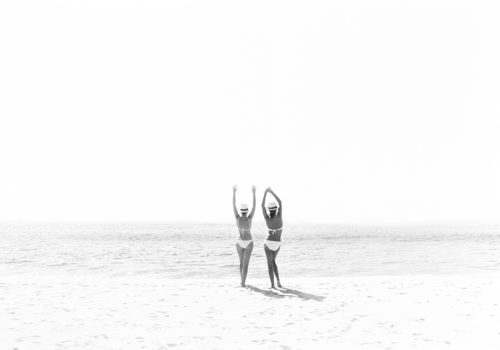 Christophe von Hohenberg has made a name for himself as one of the most celebrated photographers of his generation with a body of work exhibiting a distinctive urban sensibility.
He is probably best known for his portraits of New York personalities of artists, writers, fashionistas, and heiresses and men about town. Since the early eighties, he has created a kind of collective portrait Manhattan’s beau monde; his best known book documented the mourners as Andy Warhol’s memorial in 1987-a who’s who of fashionable New York. More recently he has turned his eye on the faces and architecture of Mexico City, where he spends part of his year.

This latest book represents a surprising and stunning departure from this body of work, at least stylistically, although there is a certain sense in which it represents an extension of his interest in New York as a subject. The beaches of the Hamptons are the summertime refuge of fashionable New Yorkers and of a generation of artist from William Merritt Chase to Eric Fischl, who have been attracted to the landscape and the marine-infected light.

Von Hohenberg joins the ranks of those artists with these luminous photographs of the beaches of the Hamptons. The ghostly figures on the sand, silhouetted against the surf and the sky, might be famous New Yorkers, but their individuating characteristics have been bleached away by the sun and the figurative squint of the observer (Although curiously, the dogs seem to have personalities.)
The humans have become anonymous and diminished against the overwhelming backdrop of the ocean. These images are by turns soothing and haunting and yet somehow familiar.
Von Hohenberg has discovered a perspective that was in front of us all along, which we couldn’t quite isolate until he presented it to us.
Jay Mclnerney

The images from “The White Album of the Hamptons” were all shot on 35 mm Film, with a Nikon F3 24mm lens. The images are not Photo Illustrated . Everything one sees is on the negative. there is some dodging to lighten and darken certain areas as is done in classical photography. When I walk the beaches in the Hamptons

I think of Cartier Bresson shooting in the streets, waiting for the magic, the unexpected, on every corner. I am like a predator with a camera walking the beaches for hours waiting for the unexpected to shine into my heart. “Click Got You” what a lovely High. Example: my photo with two dogs social distancing, watching this development come together was very exciting. Watching for over 20 minutes their body language in high performance, jumping up and down and in circles, until the Black Dog bowed down. In the end they stared and stayed the distance and when the drama was over they went on their way and sadly never kissed.
Christophe von Hohenberg