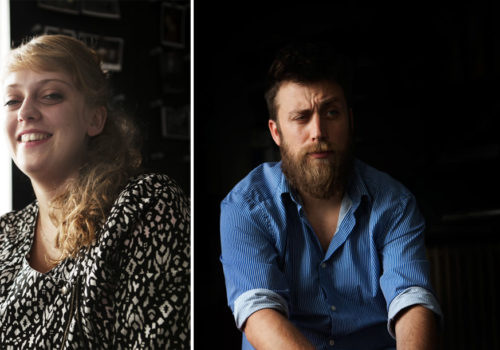 For the fifth edition of the Carte Blanche PMU, two photographers, Léa Habourdin and Thibault Brunet, decided to spend two months immersed in the world of gambling in PMU betting offices and bars in the Pas-de-Calais region of France. Their project is ongoing. L’Oeil de la Photographie spoke with them last Friday as they prepared for their exhibition at Le BAL in Paris. The atmosphere was full of pressure and anticipation.

For this year’s call for submissions to the Carte Blanche PMU, Léa Habourdin and Thibault Brunet sent in a project entitled Ecran (“Screen”). The idea was to make a fictional and subjective documentary by spending time at PMU betting office bars and meeting with their regulars.

“Everyone who has been to France knows PMU bars. Everyone has a special relationship with them, whether it was from close up or far away. Although it remains a world apart, we wanted to immerse ourselves in the environment to see how it works, all while trying to keep our distance. For this we decided to use a ‘screen’ during the photoshoot, employing unconventional equipment like a 3D scanner and a camera trap purchased at a hunting store. These tools were chosen in order to keep the necessary distance between them and us.”

Fascinated by the work of the past winners of the Carte Blanche PMU, Léa and Thibault saw the various possibilities open to them, feeling they could find the excitement in the world of gambling. Thanks to the support of PMU, the two photographers, who had never worked together, set themselves to the task of creating a genuine creative experiment.

“When we saw the work of past winners, we instantly saw that we could have fun with the subject. We see the Carte Blanche as a little laboratory, a time to experiment. PMU gave us the financial means to attempt new things. It’s extremely nice to work under these conditions. Approaching this subject together, using the 3D scanner and the camera trap were all firsts for us. And it was the best opportunity to do it!”

” They won’t like being photographed by such unconventional cameras ! “

Once the project was set down on paper, the choice of equipment had been made, but there were questions about making the documentary. Malik Nejmi, a member of the jury as well as the first photographer to win the Carte Blanche PMU and who had himself worked in PMU bars, was most worried about Léa and Thibault’s project. “It’s going to be complicated. It’s a very closed world, and they won’t like being photographed by such unconventional cameras.” The regulars, many of whom are immigrants, wish to remain anonymous.

“We decided to go north, since that’s where Thibault lived for six years, and that’s where I’m from. The people there are open and have always given us a warm welcome. We had been there. We weren’t heading into the unknown. And most importantly, we had Vincent, a friend of my brother’s whose works is marketing with the PMU and its betting offices, so that made things easier. It gave us a certain legitimacy. We were introduced to the owner, gained the trust of the regulars, and only later did we get to work. It took some time to get used to the surroundings. We didn’t look like your typical photographer, Thibault with his 3D scanner, me with my compact film camera and the camera trap sitting in the corner taking pictures by itself. It was an experiment for everyone involved, like we were all playing. We bought a ticket. Somebody, seeing that we had no idea what was going on, came to explain it. The next day we came with a newspaper, and somebody explained how to read it, decipher it. It was fascinating for us to discover this unknown world…”

« We had doubts until the very end »

Léa and Thibault spent the summer in PMUs along the Côte d’Opale, trying to find the answers to the questions: why do they come, why do they come back? But the biggest problem was how to find a way to express that through photography. Neither photographer wanted to do a caricature of northern France or gamblers. They just had to take what they felt and capture it in images.

“By immersing ourselves in those surroundings, we met with several moving characters. We came to see how it worked and why it was interesting: what mattered was strategy; profit was only secondary. We experienced all this together. Lea and I performed experiments, spent time taking the pictures. We didn’t know what angle to shoot from. We had something, but we didn’t know how to communicate it accurately. We had doubts until the very end. It happened so fast, we had to take a step back… The project really began to take shape while working with Diane Dufour (Director of Le BAL), Françoise Vogt (Carte Blanche PMU), Patrick Le Bescont (Editions Filigranes) and Julien Magre (WhitePaperStudio graphisme). There were a lot of pictures. We took out a large number of them to get to what we have today in the exhibition and the book.”

The duo spent six months working on the Carte Blanche. It was a very intense experience for both of them, and a few days before the opening of the exhibition at Le BAL, the stress and excitement were palpable. “It’s good pressure, because we want the show to be good.”