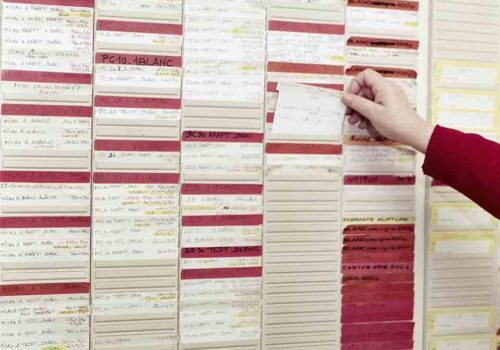 The company innovates and naturally seeks to renew itself, it must take a creative look on the world in order to withstand globalized competition. The artist also perceives the world in his own way and invents new forms that he uses to give us his perception of our environment. Bringing together the youth of creation and the business world is to create bridges between universes that do not necessarily dialogue. The principle of this artistic residency is to allow a young photographer to immerse him/herself in a company and to take a personal look at the working world and its environment.

For this edition, the residency was entrusted to two young photographers: Lucas Castel and MorganeDelfosse, both graduates of Septantecinq in Brussels.

“In the sprawling warehouse, the small family workshop, the ancestral factory or the brand new farm, the skills are different but humans are alike. The series resulting from this time of creation in the great industrial basin of Creill, navigates from repeated gestures to clear  faces. All of them have a story to tell, they take a dignified and constant look at what occupies them. Despite the relative beauty that can be seen in the cogs of a machine, it is their courage and their dreams of elsewhere that are referred to in these images. This work is dedicated to them.”

“From one company to another, everything ‘a priori’ is deconstructed over time. Each site visited is an upheaval for the first few hours and ends with a strange farewell. I had a rare and precious experience to be able to take a look at places as different as a logistics center, with more than 250 warehouse workers, or in a company with 7 employees, accountant and management included. Without a doubt, what these companies have in common is the courage and humility of the workers I have met. These photographs are the result of forged links and a 4-week ramble through the strange and surprising industrial world.”

Morgane Delfosse (1991, France) creates links with her subjects through the experience of immersion and encounter, in a documentary approach that is always sensitive and engaged. A graduate of the École supérieure des arts le Septantecinq in Brussels, her research now leads her to deal with intimate and feminist subjects or to raise political, social and environmental questions related to people and territories in transition.

Lucas Castel is a Belgian photographer based in Brussels. After various researches around energy production in Europe, he continued his research by addressing the issue of a potential reopening of a tungsten mine in France. From this idea arises the project Second season which is currently exhibited at the Centquatre in Paris. He is also the co-founder of La Numbreuse, a cultural center and an artist’s studio in Brussels offering new visibility for the art of photography.