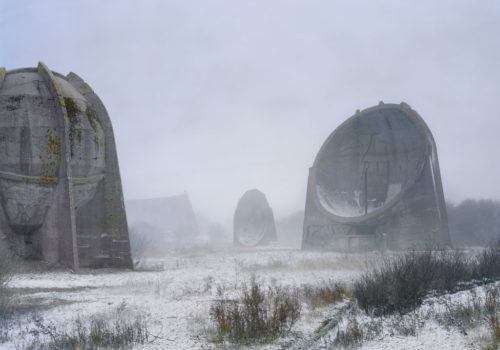 This project is a photographic mockumentary.  It deals with the representation of elsewhere through a selection of utopian architectures of the sixties: sites of scientific space research and a collection of landscapes which have received a sort of popular acceptance as Martian or lunar landscapes.  The question here is precisely one of visions, whether they be architectural, scientific or from science fiction but also personal reinterpretations of these visions. This corpus of images proposes collages of different levels of reality, associating fantasy, reality, mythology and utopia. The virtual, present in the occasional use of 3D, enables me to give a form of existence here to certain architectural projects never built. This crossover between analogical and digital contributes to the idea of mixing fantasy and reality.  This exploration ultimately constitutes an imaginary territory, a sort of test zone, marked by time, lost in a formal anachronism that accentuates the gap between prospective vision and fallen mythology.

The way the images are installed offers the spectator a stroll through a series of fragments. The dispersion of these visions suggests basically something out of frame , a narration. The photographs as a whole enable one to build up a mental landscape.  The project “Concrete Mirrors” is in part a Production du Fresnoy, Studio national des arts contemporains 2010 and benefitted the support of La Fondation Lagardère.

Born in Rouaix in 1985, David De Beyter graduated from the Ecole Nationale Supérieure des Arts Visuels de La Cambre, Brussels, before enrolling at the Fresnoy, Studio National des Arts Contemporains, that he finished in 2010.  If David De Beyter uses photography, his work combines references linked to sculpture, architecture, and anthropology. Landscapes are central to his work. His work has been exposed in collective shows in France and in Europe(Fotomuseum in Vienna, Festival de Photographie Internationale F/Stop in Leipzig, Mois Européen de la Photographie in Berlin, Fondation So Film in Sofia, the Transphotographiques of Lille, Biennale de la Photographie de Liège) and internationally with Regeneration 2 : Tomorrow’s photographers organized by the Musée de L’Elysée in Lausanne.