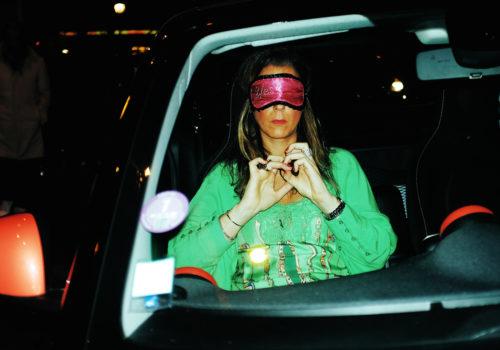 For the past four years I have been working on a photographic art book entitled “Les Nuits Fauves” and now thanks to crowdfunding it has been published by the Italian publishing house Self Self Books. Angela Madesani, well known in the Italian art world, wrote the following text.
Carolina Lopez
http://www.carolinalopezbohorquez.net/

If there has always been little point in creating categories, there has been even less in our historical period. In order to approach ‘Les Nuits Fauves’ by Carolina Lopez, one needs to divest oneself of any artistic and social prejudice. Her work requires a 360-degree full immersion into a world that represents a discovery for me. When I first saw these photographs in the artist’s residency in Milan, while chatting and having a cup of tea, I was stunned. In that moment, I realized that I did not know anything about this part of the world. What impressed me in the beginning were the strong, exasperated colors, the bodies, so loudly dressed.

What is this about? Reportage? Social investigation? Portrait? Does it really matter? What matters is the result, what sticks in the eyes after immersing oneself in those pictures full of color, mostly flat, powerful, extreme, sometimes vulgar.

Where are we? Budapest, Prague, Milan, Paris, Los Angeles. Images come with captions, locating them geographically is not that important. Each photograph started from a more or less fatal attraction. Carolina attends several parties, people invite her, she gets herself invited. She arrives there with her cameras, she insinuates herself into those human webs she likes, where she feels perfectly at ease. Burlesque, stripteases, possibly fake joy, alleged sadness. Each of her images emanate an exasperated, grotesque, loud atmosphere. It is as if those pictures, full of details, of triggers, were able to communicate even the deafening sound of those places.

Considering Carolina as a simple observer would be a mistake: she takes pictures from the perspective of a peer, of a protagonist of those parties. In this sense, her work is particular, surreal.

Her attitude refers more to that of Nan Goldin than to that of Martin Parr. Her nights are fauves, wild. Her look is that of an insider, deeply engaged. An “anti-reporter” look. As it was when she would photograph women in Istanbul from behind. Sure, she did not belong to that world in that case, but her interest was arguably not a documentary type of interest. Then Berlin, where she lived for a year and a half and fervidly enjoyed the nightlife there.

Different in every place and, to some extent, recognizable. More refined in Paris, gaudy in Eastern European countries, hip in Milan, where Carolina enjoys the numerous parties of the fashion world.

Carolina in an enthusiast of those events, which somewhat evoke the lavish parties in Trimalchio style described by Petronius in his Satyricon two thousand years ago, that  decay of morals, which was turned into images in the films of Italian directors Federico Fellini and Pier Paolo Pasolini. It is the world of the over-the-top, with the same exasperated colors, mutatis mutandis, of Carolina’s photographic work. She witnesses a society with no apparent grief, paraphrasing philosopher Byung Chul Han. She witnesses a world where grief is dulled, numbed, in order to pretend it does not exist. A narcissistic world of people with a bunch of plastic surgery, dressed up, who do not accept death, where death is however dominant in a scenario of egotistical erotism. «I observe very superficial environments, dominated by consumerism, which I, however, deconstruct with my very personal way of seeing things. I create fragmented and very close-up views »[1].

Some images are outdoor images, mostly shot in Las Vegas, where people, especially women, walk almost naked along the streets with completely hairless bodies. Nobody turns around to look at them, there is the same naturalness that we can find in Carolina’s look, who is accustomed to those worlds.

Her work is strongly influenced by her education. She studied painting in Colombia, her country of origin, and later moved to Italy, to Florence, where she continued her studies in painting at the Academy of Fine Arts. She worked with and on strong colors, which brought her back to her primigenial culture, she painted portraits, landscapes. At that point, she started studying photography at the Santa Reparata International School of Arts of Florence.

The mean is less important than the end, but it is as if Carolina had metabolized all her past experiences to arrive at this series of strong and somewhat brave works, which even depict herself in some images.

In each of her pictures, her Latin-American culture is evident, and so is her distinctive personality, which make her stand out in the environment where she works. In this sense, her work is unique, particular. The difference is in her point of view. Carolina is an observer of images, a curious woman who creeps into events.

The protagonists of almost all of her pictures are women; their faces very often do not appear in the picture, or if they do, they are not recognizable. They are night escapes, escapes from existence.

I have previously written that her point of view in her observation is from inside, but, at the same time, it is as if we were facing some sort of social biopsies, some small coring samples, in search for details that are able to represent the whole. In many of these pictures, we can seize the punctum, quoting Roland Barthes, which pierces our imagination, our look, which captures our attention and influences our reading: the strap of a bustier, the detail of a leotard, the phantasy of an impossible dress.

Listening to her description of how she works is interesting: «If I hear there is an event I am interested in, I try to engage with the organizers, asking them if I can shoot freely. I have never been told no. Generally, everybody in that world is happy to show off, to be shot. If it bothers them, they just tell me, and I do not take any pictures. Many of the participants are friends, or they become friends in time, others are night-time entertainment professionals. Women love to be shot by me, as they like the way I look at their feminine nature and how I translate it into images. I reassure them, I am not a voyeuse. Some of them even offer to pose for me»[2]. Dialog, conversation comes before each shot. Carolina does not want to steal anything.

She is impressed by mises, catsuits, gloves, pantihose, which bring her back to other scenarios, sometimes picturesque, sometimes evoking the sadomasochistic world of Robert Mapplethorpe, a very respected artist, but also some sort of ancient Japanese art, a kind of erotism of the fluctuating world. Here too, bodies fluctuate without necessarily making sense of their actions.

As I have already written, reference is often made to the grotesque aspects of Burlesque, an art genre whose origins date back to the England of the 19th century, and which has now become popular in our society made of excess, selfies, and all kinds of narcissism. It is the will to astonish, and Carolina loves to be astonished.

The subjects of her pictures are mostly young women, but also timeworn ones, whose make-up is almost always excessive, taking the opportunity to be shot. Sexual references are countless. Photographs portray very few men, and some transgenders. The spontaneity with which the Colombian artist manages any circumstance is fascinating: no moral judgement ever emerges, not even when dealing with the most uncomfortable situations. There is no caricatural intent, even though this world might lend itself to it.

I would like to understand more about these worlds I know nothing about and that I see in her photographs. Why do people go to these events? Do they have fun? Everything seems very distant from me. It is the first time that I have reviewed these types of images. The explanation is much deeper than what it might seem. People attend those events as they are drawn to the fashion, the characters who organize them, perhaps to tell everybody about it, to take some selfies.

Pierre Choderlos de Laclos, with his eighteenth-century “Dangerous Liaisons”, is not that far off. The only difference is that the environment is more democratic here, at least apparently. Being in these places is evidence of existing in a world many aim for, at the cost of exposing themselves to ridicule. But does it even matter?

In one photo, an ass worthy of Eighties-style underwear ads is shown. No Photoshop edit, it is all natural, even because the subject is an underage girl whose job is to spend entire nights on a square to be admired, and photographed. She is a Playboy Bunny. I feel like crying. Such melancholy.

Even more, the Milanese Gay club where lesbians and gays are more beautiful than ever. We are abandoning the hateful stereotypes of only a few years ago. Sexuality is liquid, it too fluctuates. So, why should we need to define genders? Just as in art.