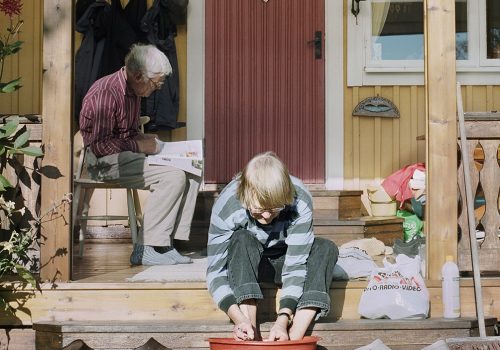 Assuming that the periphery is more interesting than the center, I strolled around the margins of Paris Photo to find books I could add to my small virtual library. My physical bookshelves are bursting at the seams and I’m trying to control my hoarding instinct.

Ana & Taige (Editions Journal) is the debut of the young Swedish photographer Rebecka Uhlin. Her color photographs are square in format, tender and intimate, and evoke the daily life of her grandparents in the house where she spent vacations as a child. “My photos have allowed me to get closer to my grandparents’ love for me,” explained Uhlin. One of my favorite images represents two dinner plates, each decorated with a single, freshly picked tomato.

Vitas Luckus, Works (Kaunas Books). Luckus, who is still little known outside his native Lithuania, is a co-founder of the Kaunas School of Photography and a superb photographer who deserves a wider audience. This volume brings together his documentary work, his study of a mime theater company, and several photos from his magnificent albums assembling amateur, family, archival, and ethnographic photos in a sophisticated montage. Kaunaus Books is currently preparing a facsimile edition of one of these albums, Other Realities, forthcoming next year.

Kazuo Kitai, Pictures from My Cabinet of Memories (Zen Foto). This is the English edition of the Japanese volume, Kioku no Hikidashi. This elegant book constructed as a novel alternates black-and-white images and autobiographic texts retracing this great photographer’s fifty-year-long career. It starts with documents of the 1960s’ events in Japan (the images are deliberately blurred, grainy, and scratched), goes on to the famous To the Villages, and includes the most recent photos taken in his neighborhood. I particularly enjoyed the montages of silhouettes covering the book’s endpapers.

Saul Leiter and Paul Auster, I Don’t Mean A Thing (The Gould Collection, Vol. 2). The principle of the Gould Collection is to pair a photographer and a writer in each volume. Saul Leiter’s poetic black-and-white and color images, for the most part published for the first time and dating to the 1940s, are intertwined with Paul Auster’s well-crafted story about New York, its neighborhoods and residents. This is a subtle, nuanced book which paints, in fine brushstrokes, an impressionist portrait of the city, seen as if through the fog or frosted glass, beloved by both the photographer and the writer.

Miyako Isiuchi, Mother’s (Akio Nagasawa Gallery). This original edition, a small-format book with a red cover, is a great classic. It brings together photographs of objects that belonged to Isiuchi’s mother, taken ten years after her death: see-through slips, used lipsticks, lace bras… make up a touching ode, a portrait of the departed seen through her possessions. “Freed from the reality of being my mother’s personal belongings, the photographed items have become simple objects; I realized it when I saw everything non-essential fall away, allowing these objects to come into their own,” commented Isiuchi.

Masahisa Fukase, Karasu/Ravens (Sokyu-sha Publications). First published thirty years ago, Fukase’s masterpiece has lost nothing of its force. Dark and obsessive, it’s a book of mourning which follows the photographer’s journey around Japan in the wake of his separation from his wife Yoko. Captured in mid-flight or perched on wires, silhouetted against the sky or apprehended as traces in snow, ravens inhabit a winter landscape that expresses the photographer’s melancholy. In Japanese mythology, the raven stands for an evil presence that foreshadows hard times to come.

Lola Reboud, Les Climats II, Japon (Editions Poursuite). In this debut book, the photographer Lola Reboud takes her project on climates to Japan. Working with volcanologists, she traveled to the south of the country to observe typhoons, torrential rain, and volcanic eruptions. For most of her images she opted for the circular format, prevalent in Japanese art, and alternates figurative photos with more abstract ones, showing oscillating seismograms that take the pulse of volcanoes. “Volcanoes are the lungs of the planet,” explains Reboud. “When a volcano spits fire, it’s the planet that takes a breath.”

Carole Naggar has been a photography historian, university professor, and independent curator since 1971. She lives and works in New York. The books under review were browsed at Paris Photo, Off Print, Polycopies, and Paris Vintage between November 8 and 12, 2017.