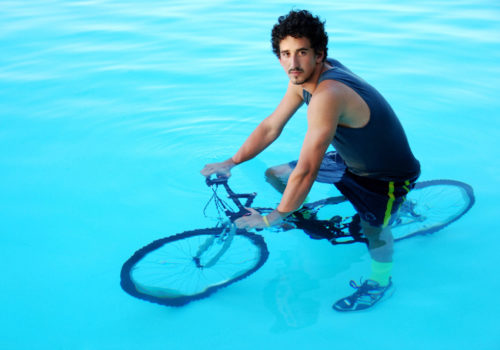 At the 2001 Venice Biennale, the Argentine artist Leandro Erlich exhibited his now famous installation, Swimming Pool. In what appeared to be a fully equipped pool, people could be seen under the water, standing, talking and moving around seemingly without any need to come up for air. In Carlo Rocchi Bilancini’s photographs, some of these people finally surface. Untouched by their underwater ordeal, they continue their subaqueous activities as if nothing had happened – though one woman opens a parasol to keep off the sun.
Any viewer can see immediately that these are not monsters from the deep, but creatures from the shallow end. There is nothing sinister about them, as there is in the Finnish photographer Susanna Majuri’s half submerged figures. These are all people we have seen before. They have responded to the photographer’s summons because, like souls in limbo, they were already almost amongst us, barely separated by the thin layer of water that still sometimes eddies around their waists. They are, to adapt the title of August Sander’s great documentary project, “People of the Twenty-First Century”, differentiated by their trades – some of them, like the cyclist, pausing only briefly for the camera, anxious to get on with their work. When the private swimming pool first became an artistic motif in David Hockney’s Los Angeles paintings of the 1960s, the pool’s surface was a blue ground as perfect as the sky in a Renaissance painting. Colour photographs like Herb Ritts’s Richard Gere – Poolside (1982) use the pool in exactly the same way. There is so little sense of gravity that the viewer can hardly tell if he is looking up or down. In Rocchi Bilancini’s swimming pool series, however, the camera is always looking down and figures rise up from the water to return its gaze. We are never allowed to forget that this is a meeting between two worlds that cannot possibly endure. These people look just like us, but they must go down again. The English poet John Keats, dying in Rome, said that he wanted inscribed on his tombstone only these words: “Here lies one whose name was writ in water”. Rocchi Bilancini makes the identity of his subjects seem even more precarious. They are writing their names in the air.