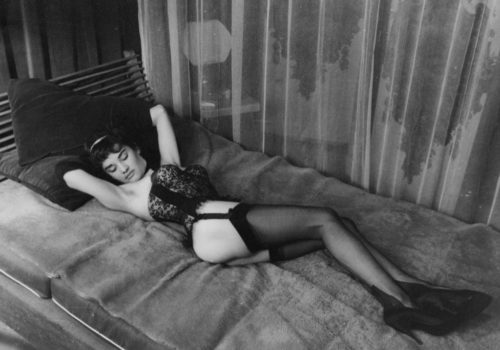 What do the prurient intimacy of 1940s prints by Carlo Mollino, a complex genius and free spirit, and Helmut Newton’s glorification of the tantalizing eroticism of modern Amazons in the 1980s have in common? Both reveal the woman and muse in the full splendor of her nudity. The SAGE Gallery in Paris offers a quick survey of the nude and its evolution through eighteen vintage photographs, from intimate images of pre-war Italy to reserved, stylized pictures inspired by 1980s’ fashion photography.

Carlo Mollino was one of the most fascinating creative minds of his time. Known to his contemporaries as a designer and architect as much as an accomplished athlete, upon his death in 1973 hundreds of photographs he had taken throughout his career, and kept carefully hidden, were brought into the public eye. This discovery was met by photography lovers with delight and astonishment, and helped uncover yet another facet of this man and artist.

Mollino’s best known works date back to the 1960s and include faded Polaroids representing young women, clothed or not, wearing accessories, wigs, and costumes, and looking into the camera with provocative allure. These young women are said to have been students, girlfriends, dancers, prostitutes, belles of Turin’s nightlife seduced and photographed in the act of disrobing in Mollino’s trademark settings. Indeed, all the screens, mirrors, beds, curtains, chairs, and various other furnishings belong either to Villa Zaira or to his last address at Via Napione in Turin, a veritable shrine, decorated like an Egyptian pyramid destined to house the owner’s mortal remains. The elements of the décor lend his Polaroids the much-studied antiquated, Baroque atmosphere of a boudoir or a modern gynaeceum. The composition and lighting are expertly rendered, while the images themselves are softened to better match Mollino’s feminine ideal. The colors are muted but nevertheless soft, and the erotic poses are counterbalanced by a nearly angelic aura. Sculptural bodies in a minimalist setting, the models appear sublimated, while the ironic opulence of the staging contradicts the lewd character of the photographs, reflecting with perfect precision the refined aesthetics of the artist, based on oppositions and contrasts between light and shadow, restraint and ornament, esotericism and sensuality.

Helmut Newton, in turn, was a major figure in photography whose style revolutionized the world of fashion with unprecedented energy. His work could be summed up in three words: portraits, nudes, and fashion photography. These three themes, three directions, are inseparable from one another, and fashion images partake of both the female nude and the erotic portrait. In any case, for Newton, the very essence of the task of a fashion photographer is to do anything but fashion photography. “I still believe that the perfect fashion photograph is a photograph that does not look like a fashion photograph. It’s a photograph that looks like something out of a movie, like a portrait, maybe a souvenir shot, maybe  a paparazzi shot, anything but a fashion photograph.” And yet, even while a good fashion photograph looks a lot like a fine art photograph, Newton refuses to qualify his work as artistic. “Some people’s photography is an art. Not mine. Art is a dirty word in photography. All this fine art crap is killing it already.” Newton’s own production is the work of a modern mercenary, a “gun for hire” who deploys all his skill and knowledge in the service of his trade, in the service of others’ trade. Those others are no less than the major magazines: French, Italian, American, Australian, British, and German editions of Vogue, as well as Elle, Playboy, Marie-Claire, Queen, Nova, and Vanity Fair. Newton’s vision, style, and his idea of woman found their main outlet in the pages of these magazines.