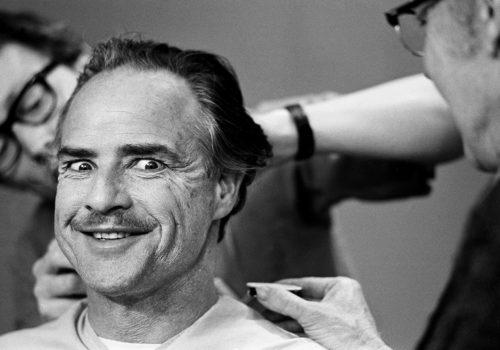 This year marks the 50th anniversary of the release of one of the most memorable epics in film history. CAMERA WORK Virtual Gallery honors this anniversary until December22, 2022 with the exhibition “The Godfather” which showcases about 40 partly unknown works by the renowned photographer Steve Schapiro. Schapiro was allowed to photographically accompany Francis Ford Coppola’s legendary filming and created visual icons that still symbolize the trilogy today.

“The Godfather trilogy is a story about love, honor, revenge, violence, family, and the handing down from one generation to the next.” Steve Schapiro, Chicago 2008

“The Godfather” was released in 1972, and despite having the renowned character actor Marlon Brando in one of the leading roles, no one suspected that eleven Oscar nominations would follow and that the Mafia epic would become one of the most important works in film history. The previously largely unknown Al Pacino achieved world fame with the role of Michael Corleone, as did director Francis Ford Coppola. Steve Schapiro documented the memorable making of the film as a “fly on the wall” — using silent equipment, he thus also manifested two of the most famous scenes: Marlon Brando with the legendary cat on his arm, as well as the moment when Salvatore Corsitto as Bonasera whispers into the ear of the Godfather.

Steve Schapiro (1934-2022), who died in January 2022, began his career as a photojournalist in 1961.
During the “Golden Age of Photojournalism” he accompanied, among other events, the presidential campaign of Robert F. Kennedy. In addition, Steve Schapiro was the first photographer on the scene where Martin Luther King was shot. Numerous portraits by Steve Schapiro (including Andy Warhol, David Bowie, Muhammad Ali, Samuel Beckett, Truman Capote, Barbra Streisand, and Jacqueline Kennedy) are now world famous. In addition to his work as a photojournalist, Steve Schapiro has worked on the sets of more than 600 films as a photographer (including »The Godfather,« »Taxi Driver,« »Midnight Cowboy,« and »China Town«). Steve Schapiro’s photographs have been published in numerous prestigious magazines and exhibited in museums and galleries since the 1960s.

The exhibition is accessible worldwide 24 hours a day, 7 days a week: https://camerawork.de/en/virtualgallery/