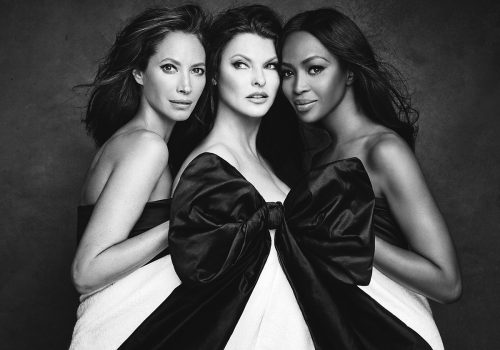 CAMERA WORK gallery presents an exhibition of Patrick Demarchelier, until September 14th, 2019. The exhibition offers a comprehensive view into the oeuvre of the artist with a selection of 30 works. These include major works as well as – in the main part of the exhibition – numerous new and never before exhibited works that he has been created the last couple years.

Patrick Demarchelier is considered as one of the most important classical photo artists in the fields of fashion, nude and portraiture.

Kate Moss, Christy Turlington or Gigi Hadid: The works of Patrick Demarchelier show the most famous supermodels of history and the present. Through their natural expressiveness and immediacy they are lifted from their podium of untouchability. Through his individual style he manages to make the intimacy of personalities tangible and also to integrate ambivalent ideas of them. In his photographs he celebrates the beauty of the models without suffocating them in an atmosphere of constructed artificiality. Demarchelier’s works are characterized by their perfection. The suggestion, which is not superimposed by reflexion and calculus is a central element of his works.

It seems like that Models such as Gigi Hadid and Anna Ewers are captured in the moment as they interact with the photographer, without being circled by oneself with one’s own appearance. Grace, grandeur and elegance are recurring characteristics in Demarchelier’s works.

This access to photography, which constantly adapts itself to the model, makes Demarchelier’s creative work in each individual photo unique and at the same time gives the ensemble its own recognition value. The ability to rebalance this fine line between recognition and innovation allows him to create a sustainable meaning for his works, making him a part of the world elite and also fulfilling his own aspiration to himself: »I like to be considered a photographer, not a certain kind of photographers.«

Patrick Demarchelier (*1943 in Paris) grew up with his four brothers and his mother in Le Havre. His passion for photography sparked a Kodak camera, which he got for his 17th birthday from his stepfather. The to begin vague passion for photography turned out as a clear goal for his future career. Inquisitiveness and the desire to perfect his photographic skills drove him to move to Paris when he was 20 years old. While working in a photo lab, he studied the imagery and aesthetics of renowned photographers of the leading fashion magazines. In the following times his increasing success made Patrick Demarchelier to one of the worlds most famous fashion photographers. His international breakthrough succeeded when he moved to New York in 1975. Since the late 1970s his works got presented in magazines like »Elle«, »Vogue«, »Glamour«, »GQ«, »Mademoiselle« and »Rolling Stone«. Patrick Demarchelier lives and works with his wife and three sons in New York.