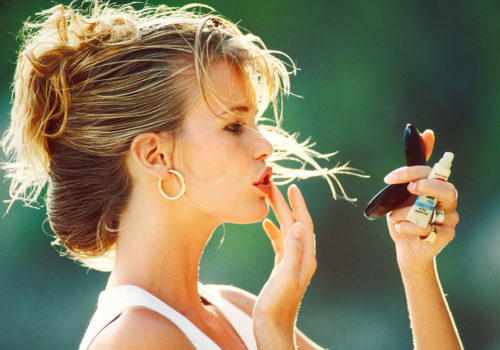 Hans Feurer is the most sensual fashion photographer. There are no phantasms in his images. Only the explosion of his passion for women for their beauty and their forms. Until October 30th, the Camera Work gallery in Berlin is presenting his first major retrospective. We dedicate today’s edition to him. Thanks to Alina Heinze from Camera Work for her help! – Jean-Jacques Naudet

Camera Work Gallery presents the exhibition Hans Feurer. It gives an insight of the creative work of the internationally renowned photographer and illustrates the progress of fashion photography from the roaring sixties until today.

The photographer, born in 1939 in Switzerland, is one of the most renowned of his profession. From that time, he is able to capture the zeitgeist of each decade without losing his personal note. He skillfully puts his models on the scene while using only natural light. He presents women as fighters who are much stronger than men.

Hans Feurer has worked with virtually every famous supermodel, starting with British model Jean Shrimpton, who Feurer once portrayed dressed in an all-buttoned-up trench coat and fedora hat followed by three Playboy Bunnies, waitresses at the Playboy Clubs in 1970. Jean Shrimpton is considered to be one of the first ever supermodels.

From early on, it became clear that Feurer focused on showing the strength of women. In 1983, he worked with Iman for an iconic photoshoot for Kenzo on Lanzarote, in the Canary Islands, helping to make the Somalian model even more famous than she already had been. But the unpretentious Feurer would never claim the fame just for himself—he always stresses how much impact teamwork has on a set. For example, the renowned stylist Françoise Havan, who worked with him on the Kenzo campaign, greatly influenced the results of several of his photo shoots, as he mentioned many times.

In September 2021, the exhibition »Captivate: Fashion Photography of the 90s« curated by Claudia Schiffer opened at the Kunstpalast Düsseldorf. Schiffer selected several photos of her own work with Hans Feurer for this exhibition. One photograph showing Schiffer checking herself in the mirror is part of the exhibition and is actually the supermodel’s favorite portrait of herself. Hans Feurer’s current exhibition at CAMERA WORK Gallery also includes portraits of fashion icons such as Grace Jones, Linda Evangelista, Liu Wen, Christy Turlington, and Monica Bellucci.