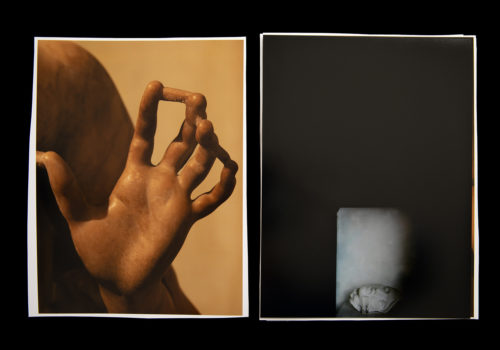 In 1633 in Rome, Galileo was condemned by the Church for having defended heliocentrism. Exemplary figure of the struggle of science against obscurantism, we often forget that Galileo is also the one who expelled from the realm of physics, to relegate them to subjective illusion, the qualities that are the very essence of the sensory world: colors and sounds, warmth, smells, flavors. Thus, the one who explains the real through the impossible (the counterintuitive law of the falling bodies) invents modern science entirely centered on matter.

Working by superimposing temporalities and representations, reviving the porosity between science and faith, between visible and invisible, L’Inexpliqué – Revenants explores, from the sensitive experience of the bodies, what is above us.

In L’Inexpliqué – Revenants, painted or sculpted bodies haunt living bodies, the stars are watching us, and Galileo, at the time of his trial hosted at the Villa Medici, enters into dialogue with Therese of Lisieux, contemporary saint who is said to have owned a camera that I miraculously borrowed from the Nicéphore Niepce museum and used under the Roman sky. Like the telescope for the conscientious star gazers, this wooden large format folding camera has become my device of vision, to find, in the very materiality of things and beings, traces of an infinity.

The Unexplained – Ghosts is part of a larger work, L’Inexpliqué, that investigates in Italy the concrete forms of access to the spiritual – miracles and the process of their recognition in the catholic world as a direct point of contact between science and faith, relics, apparitions. Conducted at the French Academy in Rome / Villa Medici (artist in residence in 2017- 2018), L’Inexpliqué is a work in progress exploring the creative links between light, vision, embodiment, science and belief.

Stéphanie Solinas (1978-) explores the thinking process involved in the act of “seeing” and the weaving of the visible and the invisible, of science and belief, of the dynamic between the Self and the Other, which shapes our identities. Her field of investigation extends from the 19th century to the 21st century, from the birth of photography to artificial intelligence. Since 2014, Stéphanie Solinas is leading Les Aveugles éblouis [The Dazzled blinds], a research elaborated as a cartography of identities, between materialism and transcendance. She anchors her investigations on 3 specific territories : Iceland, Italy and USA, to create 3 bodies of works – Le Pourquoi Pas ?, L’Inexpliqué and Devenir soi-même.

Graduate in photography from the ENS Louis Lumière in Paris, PhD in Visual Arts at Panthéon-Sorbonne University, Solinas was artist in residence at Villa Médicis / French Academy in Rome (2017/18) and at Headlands Center for the Arts in San Francisco (2018/19).

She is awarded of the Etant Donnés French-American grant for contemporary art, the SCAM Experimental Work Prize for her short movie Ne Me Regarde Pas for Opéra de Paris / 3e Scène, the Edouard Barbe Prize.

For 5 years, Solinas was professor of photography at École des Beaux-Arts in Rouen/Le Havre and at Institut of Political Science in Paris.

« People who don’t know each other. It is this trust that photography keeps track of, it is this trust that is then offered to the reader, and it is in this sense that its social meaning is the strongest for me. Even today, beyond all the concerns that everyone might have for our common future, to see that it is possible to have an encounter with a stranger through the making of a portrait in a way that is as free and intuitive as I have is for me every time a moment of grace, and a promise of hope ». – Thomas Boivin

Thomas Boivin was born in 1983. Lives and works in Paris. Graduated from the Ecole Supérieure des Arts Décoratifs de Strasbourg, (DNSEP). Since 2015, Thomas Boivin exhibits regularly. Home P-11, A flat in Menilmontant is his latest work published by the editions Homeparkpress, Hamburg.

Created in 2012, the Camera Clara photo prize is reserved for artists who work with large format camera. It rewards an author’s work, unpublished and presented in series or photographic set so that it can be judged on its consistency, both in form and in content.

At a time when a dizzying flood of images is available to everyone via the Internet and represents an indisputable wealth of communication and sharing, it is also indisputable – that alongside a democratized exchange of content values ​​- there is now a crazy  photographic attitude,  very much in fashion, which led to confusion between the medium, its performance and its artistic qualification. For the creator of this award, Joséphine de Bodinat Moreno and artistic director Audrey Bazin, it seemed essential to position oneself as a “reverse shot” or rather outside the scope of trends and praise a thoughtful walk and a certain slowness. Indeed by the handling of the device itself, its specific constraints, the artist chooses to take his time to collaborate with the light. So we come back to the very origin of photography.

However, the use of the large format camera should not be seen as an ode to past time or a process with a nostalgic tone, the files received prove it every year, large format camera work is indeed a search for writing light with multiple options. Beyond the qualities of exposure time, perspective control or sharpness, artists have in common an exclusive relationship with this practice and thanks to it invent particular expressions. Thus, for Vasantha Yogananthan the use of large format camera led him to a totally chosen composition and controlled, while inviting to look at the landscape – and its inhabitants, more in depth.