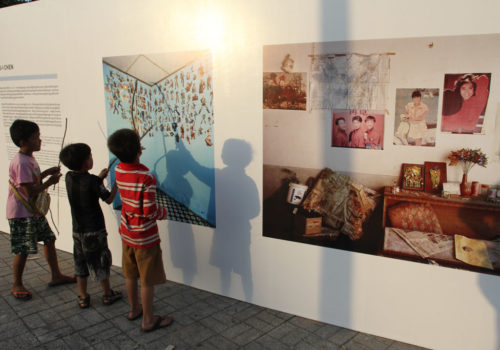 The weather had us worried up to the last minute. The end of monsoon season, which lasts well beyond the Water Festival, gave us spectacular thunderstorms and showers that left the air charged with moisture. Worse still, at the Wat Botum temple, a sudden squall blew down a twenty-meter wall featuring Mak Remiss’ series on fire. It will have to be redone, but the flame is still burning.

Outside, on the banks of the river near the Sisovath docks, as soon as the sun sets, thousands of visitors flock to the exhibitions. The black-and-white squares of Micheline Dullin’s series call to mind the construction of the Olympic Stadium, and the aerial views evoke the nearly-completed Japanese bridge, sparking discussions about the city, the meaning of the construction and how the city is changing under the shadow of the massive skyscraper—soon to be a luxury hotel—rising up on the facing shore, right across from the exhibition. The Royal Palace had made unpleasant remarks about the tower’s effect on the city’s skyline. But somehow things worked out. Meanwhile, as night falls, a woman with a flashlight examines each photograph. She remembers…

A little later, a group of four women is standing by the large photographs of fish by Chea Nging—also known as DJ Moon—talking and laughing about the the different types of fish and the best ways to cook them.

In addition to the outdoor exhibitions are indoor ones by both young and established artists from Asia and Europe. Although there’s no unifying theme, one can sense a common questioning on the haphazard urbanization of Phnom Penh.

Thailand, Vietnam—with Maika Elan’s series on homosexuals in that country—China, Taiwan and Bangladesh represent Asia this year, along with many young Cambodian artists from the Studio Images training center. The Asia we see is highly diverse and contemporary, questioning its identity, its relationship with its past and the environment.

But there’s also a poetic and fantastic tone, beginning with Laurent Chéhère’s floating houses on a large wall outside the French Embassy, and Bernard Faucon’s “Chambres d’Or,” among others.

At the French Institute are discussions, portfolio reviews and screenings of films about photography by Gabriele Basilico and Anders Petersen. This is where the closing night ceremonies will be held on December 4. It will be a big party with music and projections.

In the past six years, Photo Phnom Penh has attracted enormous crowds and given many people here a calling. We expect so many visitors on opening night that there’s concern about not enough available taxis . And it promises to be ideal festival weather, and a wonderful week of fun and reunions before facing an uncertain future: Photo Phnom Penh currently has no prospects for funding for next year’s edition