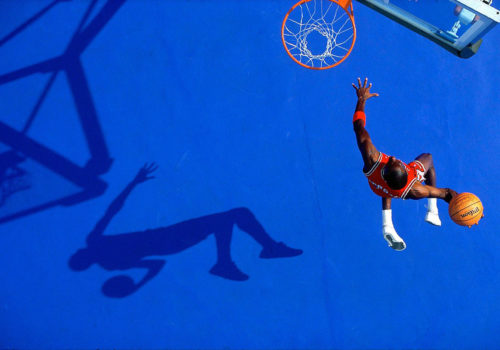 Bruce Silverstein Gallery announces the international representation of Walter Iooss Jr., widely considered the most influential sports photographer over the last 60 years. Often cited as the “Rembrandt” of sports photography due to his use of light, color, and composition, Iooss had the innate ability to capture what Henri Cartier-Bresson defined as the “decisive moment,” creating images that transcend the fame of his subjects, and that have come to represent modern sports culture. Born to a family of sports fans in Texas in 1943, Iooss discovered photography at 15 when his father gave him a camera. Within a year, he began photographing professional football games. At just 17, he received his first assignment for Sports Illustrated, and a few years later, was shooting their covers. Iooss would produce more than 300 covers for Sports Illustrated over the next 58 years, each reaching an audience of millions of subscribers.

Humans engaging in sport have always been the subject of artistic expression. From 15,300-year-old cave paintings depicting figures sprinting and wrestling found in the Lascaux caves in France to ancient Greek pottery featuring boxers to paintings of athletes by some of the great masters of the 20th century, including Picasso, Boccioni, and George Bellows, the trials and tribulations of the sport have inspired some of the most known and admired works in art history.

Iooss has uniquely captured some of the greatest moments in sports history and the most accomplished athletes of all time throughout his career, both on and off the field. His subjects span a wide breadth of contemporary sport, including baseball, basketball, boxing, football, golf, gymnastics, soccer, tennis, surfing, track and field, volleyball, wrestling, swimming, and yachting. Iooss’ artistry was in his ability to pre-visualize the final image, often planning them years in advance, waiting for the right moments, staging the lighting, camera position, and lens settings in anticipation of the action about to unfold to compose a photograph of the defining moment.

From the 1961 black and white image of Roger Maris breaking the single-season home run record to “The Catch” depicting Dwight Clark’s leaping reception of Joe Montana’s end zone pass to win the 1982 Championship Game, Iooss’ images have been indelibly etched into sports history and collectively represent an unparalleled and historical body of work.

Iooss received the Lucie Awards Lifetime Achievement Award in 2004 and was inducted into the International Photography Hall of Fame in 2018. His work has also been featured in numerous museum shows. He has produced countless photographic publications, including collaborations with Michael Jordan, Arnold Palmer, Ken Griffey Jr., and Joe Montana. In August 2020, Christie’s auction house held a single-artist auction entitled “The Athlete: Photographs of Walter Iooss, Jr.”