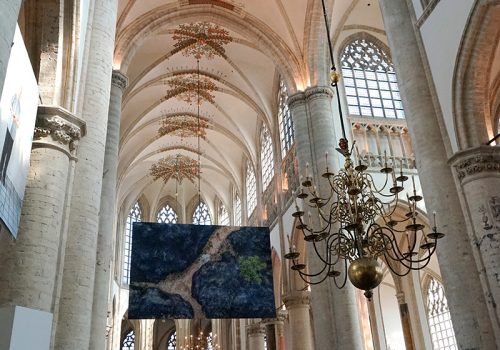 In addition to the Best of Times Worst of Times, BredaPhoto presents a second theme, China Imagined. The venue for this initiative is the main church, a grand gothic monument founded in the 13th century and further extended till the renaissance. From 1576 the building became a bone of contention between the religious factions, now Catholic then Protestant. Ultimately, the battle was settled in favour of the Protestants, and everything reminiscent of the past was erased. It turned out to be a blessing: from the 20th onwards late medieval frescoes were uncovered from beneath the whitewashed walls and restored. You can’t miss a gigantic 8m high saint Christopher surrounded by creatures that eloped from a painting by Hieronymus Bosch (who also lived in this region).

But let’s look at photography. Again, a very wide range, 20 projects and 22 photographers, too much to cover in a brief overview. The aim of the curators Ruben Lundgren (1983, NL) & He Yining (1986, CN) of this exhibition is to influence the perception of China. We usually think of that country as one massive monolithic block, but this exhibition manages to nuance the view of average Western people.

Chinese economy is in transition: more and more payments are made electronically, which boosts money traffic. But this also increases the possibilities of control of the citizen for the state.

The comfort of the average citizen is increased and a middle class is created. The price for this is an increasing burden on the environment and enormous pollution. The result is ambiguous: progress brings benefits, creates polarization and becomes an efficient weapon in the hands of an authoritarian system

Zhang Kechun’s (1980, CN) photography is already a sufficient motive to visit the exhibition. In classical Chinese painting the grand imaginary landscape is omnipresent. Kechun bridges the past & present. He was inspired by the work of Alec Soth, and in “Between the Mountains and Water” he shows the collision between the natural landscape and the newly established industrial environment. Nature is grand and overwhelming, and industrial buildings compete to outstrip nature. And finally Kechun adds the humans, small, insignificant, always in a ordered group as if they were a third element in this collision of titans.

The environment also plays an important role in the work of the Chinese-Dutch photographer Xu Xiaoxiao (1984, CN/NL). For a long time, the Great Wall was a fortress against the invader, a line of defense against the outside world. But “The Wall” doesn’t actually exist, it is a collection of buildings around which people gather. The photographer traveled the along it’s trail, met people and captured them in powerful images.

The various projects by and about women particularly touch me, they paint a story with many facets about different generations.

For example there is the story of Kurt Tong (1977, UK) who sheds her light on a woman who left everything behind to work for a family. She represents a group of women who broke free from their traditional roles in a conservative society, but the price for independence was paid with isolation – they lived in the service of their masters. Kurt Tong’s nanny was such a woman, at an advanced age she only had 8 images to illustrate her life story. In “Combing for Ice & Jade” (2011-18), Tong retraces her life with images from the family archive, magazines and other sources.

Other voices tell the story of women from a different angle. Guo Yingguang (1983, CN) shows the fate of highly educated women on the marriage market, Pixy Liao (1979 CN) on the other hand took traditional roles in a relationship as self-evident. With the start of a new love affair, she realized she did not have to accept the burden of tradition. She breaks through gender and sexual roles and documents her path in an artistic project.

Contemporary womanhood is the subject of Luo Yang (1984, CN). She worked from 2008 till 2017 on the series Girls, focusing on women born in the eighties, her peer generation. This project started as a form of introspection, she wanted to understand herself through the women around her. Her portraits are direct, bold and show contemporary, modern, self-assured women. She also exposes the different subcultures and shows the contemporary Chinese woman in all her diversity. Kurt Tong looked at the women who grew up in traditional imperial China, Yang closes the cycle as she looks at contemporary women, wondering what the future will bring them.

Between 2015 and 2017, 70 Chinese high tech entrepreneurs sensing the market potential of bike sharing systems rushed into the business. With massive investments they were able to produce 27 million bicycles for all major cities in China. One company deployed over 10 million bicycles in 250 cities but by the beginning of 2019 the company almost bankrupt leaving the redundant bikes on the street. The government ordered them to be removed. Wu Guoyong (1963, CN) photographed bike cemeteries, his images seem abstract compositions, with eerie colour patterns. Only when you look closer do you see a pattern of rejected bicycles.

One of the great discoveries of “China Imagined” is the sparkling street photography of Liu Tao (1982, CN). He is a controller for a water company, and during his journey through the backstreets of Hefei he captures little gems. The sparkling humor is reminiscent of Doisneau – I haven’t seen so many people laughing at an exhibition – certainly a photographer who deserves to enjoy wider fame!

Jiazazhi Press, editors of e.g. the magnificent books of Zhang Kechun, is also present with a selection of their publications.