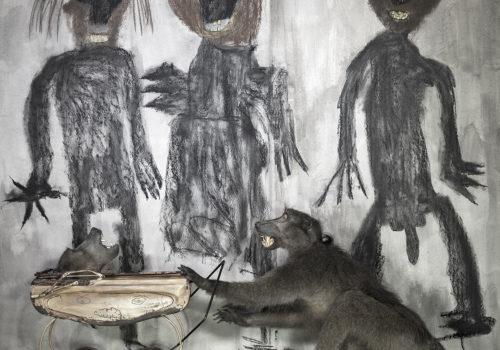 The Chinese Zodiac is represented by twelve animals.
In order, they are: the Rat, Ox, Tiger, Rabbit, Dragon, Snake, Horse, Goat, Monkey, Rooster, Dog, and Pig…
This exhibition showcases twelve of Roger Ballen’s photographs. in black & white or colour, each animal is represented.
In an echo of Walker Evans’s documentary portraits of 1930s depression-era farmers in the North American dustbowl, Roger Ballen’s photographs from the early 1980s chronicle the poor,  marginalized white people of the dorps – small villages in the platteland of South Africa – who had once been beneficiaries of Apartheid but were faced by economic ruin.
Such figures seemed to express realities and relationships for which no words immediately sprang to mind; like the art brut that Ballen had encountered as a student in the US, both their lives and the images of themselves that they unconsciously produced, transcended any “polite” idea of culture and fell instead into unsettling archaic patterns and archetypes that had no clear boundaries or meanings.
Out of this, an important idea emerged: humanity was an integral part of the natural world and was not necessarily superior to the rest of it.
Since that time, Ballen has concentrated on developing photography further, drawing inspiration for his films and installations from his experiences of isolated minorities in urbandistricts.
In such chaotic, claustrophobic spaces he finds synergy with people who, for various reasons, have rejected social conventions to create isolated cultural models of their own.
For him, this process is a necessary part of the excavation, discovery, and expression of a barely conscious parallel existence which at some level he – and we all – share.
For Ballen, the often tense, or destructive, intimacy between animals and humanity, with their different behavioural and environmental needs, contributes to a much wider ecology, part of a cosmology or holistic system of being.
This has provided an inspiration for his soon-to-be-opened Inside Out Centre for the Arts in Johannesburg where many of his new installations, set alongside previous photographs and films, focus on the existential impact of art not only for individuals within particular societies, or continents, but also for us collectively, throughout the whole world.