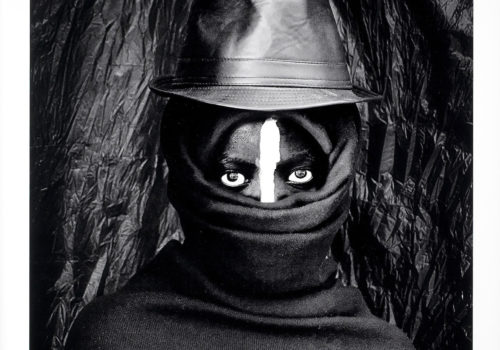 Bonhams offers an exceptional collection of contemporary photography by African artists in their upcoming sale in New York on July 27th, 2022.

An iconic work by Malian artist Seydou Keïta, titled Bamako, is exemplary of his style and has been exhibited at the Guggenheim in New York and Grand Palais in Paris. It presents two women dressed in matching m’boubous patterned with ostriches and arranged with their arms and hands in an intimate position to convey their close interpersonal relationship as co-wives. It is estimated at $7,000 – 10,000.

One of the most celebrated African photographers of the twentieth century and dubbed “the eye of Bamako”, Malick Sidibe, has 5 works in the sale including silver gelatin prints and two folder collections. Many of the works capture the celebration of newly independent Malian society as well as the influence of rock’n’roll, twist, and Afro-Cuban music that was thriving in youth culture during the 60-70s in Bamako. Sidibe was a welcomed guest at parties, taking the camera to the dancefloor and capturing exuberant movements of his guests.

A striking black-and-white image, Isililo XX, by South African Zanele Muholi (b. 1972), estimated at $7,000 – 10,000. A ‘visual activist’ known for their photographic work which documents the lives of LGBTQIA+ people living in South Africa, the offered work is from a series of self-portraits in which Muholi assumes unique personas. In this image, the title of which translates to ‘weeping’ or ‘lamenting’, Muholi works with the complex nature of self-representation, concealing much of their face with a knit fabric that has been tightly wrapped around their neck.

Exhibited in London’s Saatchi Gallery, a photograph by South African Mikhael Subotzky (b. 1981), captures a strip search of one of South Africa’s most dangerous institutions. Subotzky is known of capturing the country’s prison system and this work also exhibited at the prison on Freedom Day (April 27, 2005) in the same cell that once housed Nelson Mandela. It is estimated at $1,200-1,800.

Helene Love-Allotey is the Head of Sale.