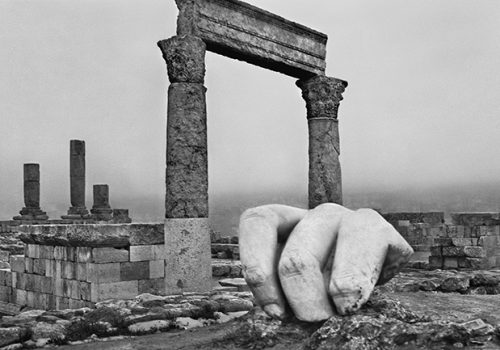 For nearly thirty years, Josef Koudelka has traveled around 200 archaeological sites around the Mediterranean, from which he has taken hundreds of black and white panoramic photographs. From this unique project, the BnF National Library of France is presenting 110 exceptional prints: a new collection entitled Ruines, which reveals all the strength and beauty of Koudelka’s visual lexicon. The BnF thus honors one of the last great masters of modern photography, a photographer with a monumental work, whom Henri Cartier-Bresson considered to be his “brother” in photography and whom he had identified as having a painter’s eye ”.

This exhibition is accompanied by an exceptional donation from the photographer to the Prints and Photography Department of the BnF of nearly 170 prints from the same series.

“The Greeks and Romans were the greatest landscape artists in history and therefore, for me, photographing the landscape was about showing this admirable science of space, light and form. I have found what is most precious to me now, the marriage of beauty and time. ”

Unparalleled project in the history of photography, the Ruins series is the result of thirty years personal work during which Josef Koudelka traveled in 20 countries around the Mediterranean to photograph the ruins of all the high places of Greek and Latin culture, cradles of our civilization. While some images may have been exhibited and published before – Periplanissis (1997), Chaos (1999), Rome, théâtre du temps (2003), Vestiges (2013) – the Ruines series forms a set of 110 prints that has never been shown.

From France to Syria, via Morocco, Sicily, Greece or Turkey, there are 110 panoramic photographs in black and white that deliver the gaze of Josef Koudelka of the chaotic beauty of the ruins, remains of monuments transformed by time, nature, the hand of man and the disasters of history.

The panorama: a certain look and a signature

Over time, the panorama has become the signature of Josef Koudelka’s landscapes. It offers the means of projecting oneself in imagination in the very places that are represented in order to have the experience of the landscape and invite the viewer on a journey. But through the unique use that the photographer makes of it, the panorama, fragmentary and disrupted, is also able to restore the ambivalent image of the ruin. These images from the ground, from above or from a low angle, guide the viewer to sites that have been reproduced many times and refute the impression of déjà vu through the photographer’s unique gaze. Alternating distant views and close-ups, fragments, play of shadows and layering of plans, the photographs of Josef Koudelka testify to a subjective and fragmented vision of the ancient landscape, which places the series Ruins as a vast allegory of the world.

“The marriage of beauty and time”

Josef Koudelka does not wish to immortalize the ancient ruins, to freeze them in a romantic vision but on the contrary to return again and again to the same places to record the evolutions linked to the destructive passage of time and men, of nature which regains its rights. .

For the photographer, art, and more specifically beauty, reaffirm their presence at the heart of what makes and undoes the world. For him, repetition as a method and not as a motif is also precisely what allows him to achieve the right photograph, what he calls his “maximum”: repeating the same gestures while welcoming a difference each time. who inscribes his work not in the past but in a future.

In Josef Koudelka’s photographs, the sumptuousness of the sunrises and sunsets which set the pavements, the columns, the sculptures of the bas-reliefs ablaze with accuracy underline the marvelous geometry of the sites. The choice of the stretched frame complicates the composition and gives the ruins a grandiose character. This work, worthy of a Sisyphus, is served by a whole visual grammar made up of tilted, fragmented views, panoramas without horizons, sublimated by a powerful black and white that reveals the play of light and shadow.

These landscapes are an ode to the ruins of Mare Nostrum and challenge us on the need to safeguard the heritage of this civilization – some of the traces photographed by Josef Koudelka have now disappeared, destroyed by wars and terrorism, as in Palmyra. The photographer thus enhances a territory, at the origins of our European cultures, rich in the exchanges that have shaped it and the archipelagos that inhabit it. What drives Koudelka here, as in all of his previous work, is the search for beauty, a beauty that can nestle in the heart of destruction but which, like that of ancient ruins, resists.