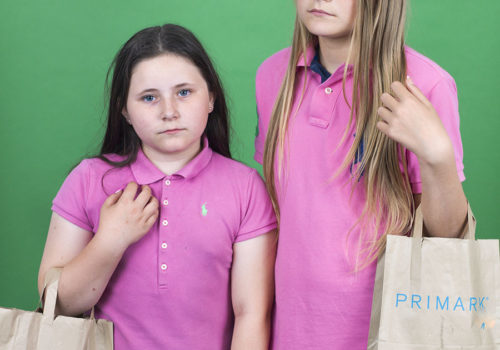 October 23 sees the launch of Saturday Girl, an award winning collection of portraits of young women in the UK taken by Yorkshire-based photographer Casey Orr, and published by Bluecoat Press. The portraits in Orr’s book speak of the undercurrents in culture, the unspoken ways in which we express our values, desires and tribe identities through self. The series also explores regional and national UK identities as read through style and self expression.

Between 2013-19 Casey Orr travelled with her camera and four backdrops to 15 cities across the UK setting up a makeshift studio on Saturday afternoons in shopping centres, vintage stores, photo festivals and galleries, and waited for young women to come along dressed up for the weekend.

From Leeds to Liverpool, Belfast to Brighton, Edinburgh to Cardiff, Manchester to London, Orr recognised among the 600 (mostly) women she photographed “many similarities and high street influences but also wonderful eccentricities and regional variations along with their verbal accents and dialects”.

Her touring studio offered a literal safe space beyond “the confines of weekday responsibilities, institutions and family” and the toxic soup of online selfie-posturing, fake interactions and too-perfect body images. Orr beautifully captured that moment, when each teenage girl could feel that she was seen for what she is.

The project began and ends with individuals as represented by twins from Leeds, Immy and Ione. Orr first photographed them at the age of 15 and five years later, in 2020, they are almost unrecognisable. Their hair, clothes and make-up are different, but most remarkable is how their gaze has transformed to confident self-acceptance.

The book is designed by Andy Edwards, playfully, with images of the studio, yellow paper stock and spreads in both portrait and landscape so that the viewer turns the book while viewing, keeping it in motion in reference to the constant movement and energy of youth, of the young women photographed. Charlotte Jansen provides an insightful contextualising essay.

The years of Saturday Girl saw a redefinition of gender as the male/female labels began to fall away to be replaced with more fluid identities. These new freedoms are expressed here as the project became one where anyone could take part and identify as a Saturday Girl. For this generation, diversity became the norm.

Looking to the New Generation… Autumn 2021 sees the start of the next iteration of Orr’s project, Saturday Girl About Town, which will explore the impact of the pandemic on young women’s identity in towns rather than cities and answer questions such as:

To mark 10 years of Saturday Girl in 2024, an exhibition is planned at Open Eye Gallery, Liverpool.

Saturday Girl to be launched with a talk and signing by Casey Orr at BOP 21, Bristol, on Saturday 23 October at midday.