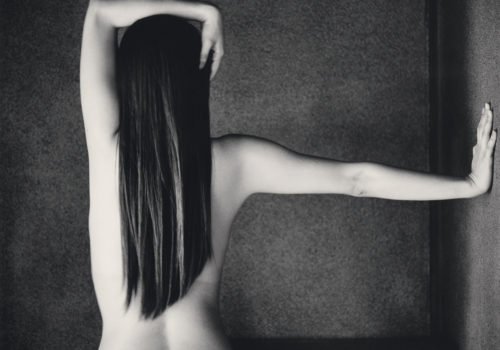 “In every culture and across time, artists have been captivated by the human figure.” – Thomas P. Campbell

The human body hasn’t changed throughout history but the way we photograph it, and the boundaries on how we can reveal the nude (or not) is a matter that is related to cultural boundaries, one that shifts over time and varies in different belief systems and different cultures.

In photography’s 180-year history the body has always been present. Daguerre himself and his circle took nude photographs between 1837 and 1840. Due to the extremely long exposure they originally used small scale copies of Roman and Greek sculptures before live models could replace them when exposure time could be measured in seconds rather than minutes. This slice of history is expressed in the curation of Michael Kenna’s prints by combining his photographs of sculptures and female nudes. His nude series, titled ‘Rafu’, is highly sculptural and yet the way he captures sculptures makes them mysteriously life-like. The women Kenna photographed are all Japanese; dancers, actresses, office workers, photographers and yoga practitioners, taken during his various visits to Japan over a 10 year period, which one could say is his spiritual home. He is almost revered as Japan’s national photographer even though he never lived there and is not Japanese himself but because of his incredible sensibility towards Japan and having photographed its temples, shrines, gardens, seascapes and landscapes for over 30 years.

The first photo-book ever made was in 1843 by Anna Atkins who bundled a set of photographic prints (cyanotype photograms) of algae and plant leaves. There is currently a renewed interest globally in analogue photography as well as alternative printing techniques, maybe as an antidote to the increasing digitization of our lives. Ben Felten’s cyanotypes keep Atkins’ memory alive not only by working with the cyanotype process but visually, through the blend of plants and nudes in the form of double exposures. Like Kenna’s work, what appears effortless is in fact highly technical, resulting in each handmade cyanotype print being unique with its own tones and markings.

“First, let us remind ourselves calmly that eroticism is not an aesthetic value. The quality of space, of the graphic line, and of light are all aesthetic values, but sexuality is not. The touch, the desire, and the warmth of the body are sexual values, not aesthetic ones. Yet these two fields, although radically separate in the world of the mind, are intimately linked in reality, a paradox that is evident in every “nude” in history. Beauty and desire combine in a sensuality that belongs to both, even though for obvious reasons it should not. The very word “aesthetic” denotes something that we feel, but precisely because we have placed the experience at a distance, as a subject for disinterested contemplation, a confrontation with a reality that is alien to us. Erotic feeling, on the other hand, is possession, a confusion of bodies that breaks down the distances established by social norms. Both have a profound relationship with the absolute – some would say with God – but each in its own way, and for that very reason, the two are both irreconcilable and inextricably linked.”

The push and pull between naked and nude, eroticism and beauty, sexuality and purity… is ever evolving. Today there is a great wave of awareness surrounding gender politics, race and LGBTQ+ rights and it is undeniable that in the past the majority of nudes in art were created by white male artists. But that has changed, albeit slowly, and we are now able to see the world through many different and more interesting lenses. Millennials who are battling the semi-recent developments of social media are also fighting against the old world rules, the idea of gender fluidity or neutrality, and other expressions of ‘self’, is becoming part of everyday vocabulary. One of the friends that Au Tze Long photographed titled the ‘Witch’ series is all about this ambiguity, the male and the female elements in this person are interchangeable and in this, lies the beauty of the photographs. This is part of Au’s ‘offering’ to her models, a ritual by which to bare all but with the agreement to represent this vulnerability in a sensitive way. One of her series which will be on display is of SiuDing, the pioneer of body positivity in Hong Kong, who has been pushing the barriers through life drawing and exhibitions but primarily by giving her own body as vehicle to show that the body is beautiful and wonderful in all its variations. Hong Kong is still very conservative and nudity/nakedness is often associated with prostitution and the bias that exists towards this ‘lower class’ section of society. Another interesting series of Au’s work is based on her dreams, titled ’Intosomnia.’ Here she sees the characters as “just human bodies, flesh and pain” – sexuality is not the topic. Instead the unclothed bodies set in natural outdoor landscapes expose “memories, feelings, the weaker self, the darkness and the inner child. It is said that nakedness in dreams translates to being helpless or anxious in the dreamers reality.”

The therapeutic space created by Tze Long has some similarities to Felten who uses amateur models and encourages a safe space for them to be naked, with a clear contract that the model can choose which photographs are later shown to the public as well as giving them a percentage of the profits from future print sales – which is a rare gesture indeed.

Although ‘the nude’ is a gigantic field within art and photography – we humbly present to you three voices and three photographic studies on the topic. In doing so we also open up our own horizons, this being the first time Blue Lotus Gallery presents an exhibition of only photographic nudes.

“The beauty of the body reflects the purity of the soul.”- Magnus Weidemenn

Prints, books and zines by Au Tze Long, Ben Felten and Michael Kenna will be available at the exhibition.

Au Tze Long sees photography as a sublimation from reality to spirituality. A graduate of the School of Creative Media, City University of Hong Kong, she was awarded a scholarship through the Julian Lee Asia One Photographic Awards in 2017. Her first photo-book Intosomnia was published in 2018, and in 2018-19 she held solo photography exhibitions in Hong Kong and Tainan, Taiwan. Au is also an indie singer in two bands – Carame/ and Artichoke Heart — her music interests are diverse, from dream pop to improvising ritual chant.

Ben Felten is a French born photographer living in Hong Kong. He started his photography work 15 years ago shooting jazz musicians in small Parisian clubs. When he moved to Asia in 2014, his work shifted towards street photography using a panoramic film camera. This led him to exploring the more unusual features of film photography, including double exposures. He was also commissioned to illustrate a couple of large format books, Dreamhounds of Paris (2014) and Unknown Armies (2016). This led him to perfecting his portraiture work, and in 2018 the double exposure and portrait threads merged into the Photosynthesis project. This in turn rekindled his love of cyanotype printing which he’d dabbled in 10 years earlier. In 2020, he released a zine of his panoramic street work called Colours of Shanghai.

Michael Kenna was born in 1953 in Widnes, Lancashire, England, just 12 miles from Liverpool. At the young age of 10 he felt a calling to a more ascetic life and his parents enrolled him at nearby St Joseph’s College, Upholland. This was a junior seminary school and Michael trained to be a Catholic priest until he was 18. Spirituality and meditation were important parts of his education. Reaching puberty age, Michael realised the life of a celibate priest was not his vocation. He continued his studies at the Banbury School of Art (1972-73) and finally graduated in photography at the London College of Printing (1973-1976). In 1976 he first experienced the art gallery scene in New York and a few years later he moved from the UK to San Francisco where, for a while, he took any job he could to survive. However, he particularly enjoyed his years assisting the famous West Coast photographer Ruth Bernhard. Kenna spent numerous hours working with her and learning from her to perfect the craft of analogue printing. A breakthrough happened in 1981 when he received the Imogen Cunningham Award and subsequently sold out a major exhibition at The Stephen Wirtz Gallery, San Francisco. Since then, there have been close to 400 solo exhibitions of Michael Kenna’s work in galleries and museums throughout the world. Kenna has had over 50 books published on his work and has won numerous awards including the “Chevalier of the Order of Arts and Letters by the Ministry of Culture, France. His limited edition fine art photographic prints are in the permanent collections of such important institutions. Michael Kenna currently resides in Seattle, Washington, USA.