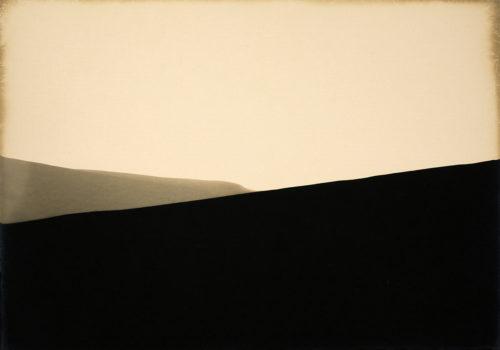 What is photography? It is from this question, simple at first glance and to which everyone seems to have a ready-made answer, that Thierry Bigaignon set out to build this large-scale collective exhibition. An exhibition that brings together no less than ten artists, men and women from all walks of life, who, through their practice and the pieces they produce, debunk any preconceived ideas that one might have of photography. Anthology.

The exhibition begins with photosensitive paper from the 1920s, developed by Alison Rossiter, a 69-year-old American artist who, as Marc Lenot wrote, “does not use a camera, does not use a lens, does not make landscape images or portraits, does not consider photography as a representation of the world and does not submit to the rules of the camera”. And yet, it would be difficult to consider her work as anything other than photographic. The tone is set ! Many pieces follow, each as unique as the next, which seems to take photography where it is not expected, to push it to its limits.

The Iranian artist Morvarid K, whose two pieces from two distinct series are presented, seem to desacralize the print and especially its paper support, so dear to Alison Rossiter, sometimes almost completely covering his prints under several kilometers of small lines made with a pen, or by making a Japanese dancer wear some of his prints, directly on the body and for several days. The photographic paper is then paradoxically sublimated and the physical act of printing, traditionally dedicated to the darkroom, is moved there or extended beyond its walls.

Aleksandra Vajd, a Slovenian artist, experiments with the constituent elements of photographic language, its laws and its structural variations. She asks the question of how far it is possible to persist in a medium that has been so long linked to the mimetic illusion and the semantic construction that derives from it, that has slowly worn out and that has become increasingly further lost in the mannered sequence of images which, in a saturated iconosphere, rarely have anything new or really significant to say. These images, precisely devoid of images, overturn our deepest certainties about photography!

The exhibition continues with the work of Fernando Marante, a Portuguese artist newly represented by the Bigaignon gallery and whose work is exhibited on its walls for the first time. Fernando explores the effects of time in the construction of the photographic image. In his quest, Fernando tries to visually reveal, in a singular writing, something whose existence would only be speculation, to reveal the possibility of an image that would be invisible between two given times. Through movement, the artist uses time as a tool to play formally on variation, multiplication and addition, contraction and distension, accumulation and disintegration. He creates images that are patterns of intentions, visual imprints of all the decisions made during the photographic process. Two of his pieces are on display: while one stretches space-time in an abstract way, the other redefines color in photography.

While it may seem natural to link photography and technology, as this medium since its invention has evolved through and with technical progress, Lionel Bayol-Thémines, in his practice, questions the history of images and their creative process, and presents here a photograph against the current of this famous technical progress. An image of the Earth and its Moon, an image that could not be more contemporary, and which nevertheless, instead of using millions of pixels, is offered to us on the scale of a single pixel!

The visitor could feel lost in this curatorial richness  , jostled by these various practices, but the French artist Vincent Ballard then comes to put the essential in place with a lucid diptych: two prints on which are inscribed “Something” and “Light” as if to remind one of a simple definition of photography.

We therefore thought we were “reassured”, before finding ourselves face to face with the work of Thomas Paquet entitled L’Observatoire! Thomas Paquet, for several years, has indeed undertaken a work of photographic study around its fundamental characteristics: light, space and time. He presents here his latest piece which allows you to follow and interpret, at any time, on a screen created by the artist, the course of the Sun and the Moon in our sky. This light sculpture, a digital work of which an NFT version will be launched in parallel on the Danae.io platform, shows us an image, a geolocated color gradient that evolves in real time. It nevertheless remains an essentially photographic work, because it should be explained that this unique piece is the result of writing with light, and not just any light, the most beautiful of all, the Sun.

Yannig Hedel, artist represented by the gallery and known for his highly photographic work consisting of sumptuous prints in an infinite scale of gray, creates astonishment by presenting here a set of volumes, made some thirty years ago. Sculptures, yes, but photographic sculptures could he reply, because they are inspired by his own photographs and could not exist without them. The exhibition ends with two artists who bring the definition of photography to its peak!

For Vittoria Gerardi, Italian artist from the gallery, this definition cannot be reduced to the fixation of an image, a definition commonly accepted since Nicephore Niepce. By choosing not to fix her prints, Vittoria Gerardi indeed looks at the very nature of photography, light and time, and explores the boundary between the visible and invisible elements that make up a photograph.

Finally, by closing the exhibition with her concrete columns called Concrete, of which the artist only polishes a few faces, Anne-Camille Allueva works on the ephemeral image, its reflection, and asks a fundamental question: would photography exist if her invention had not taken place?

This exhibition, an illustration of the line of the Bigaignon gallery which qualifies itself as photosensitive contemporary art, shakes up our certainties, questions and challenges both visitors and photography itself, and presents around fifteen works from March 31 to May 14, 2022.