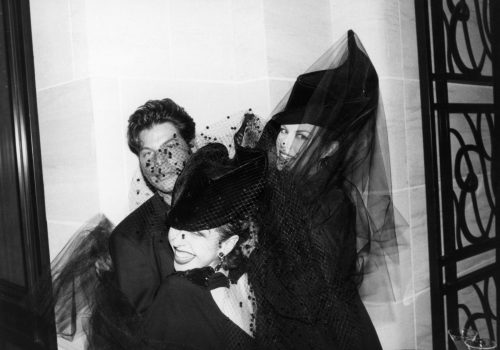 Bill Cunningham was a documentarian of fashion for over half a century, and his photographs are informed by a lifelong passion for style.  Part of the fabric of the ever-changing metropolis of New York City, Cunningham was renowned for his ability to spot and photograph fashion trends at their inception.  Singular in the history of fashion photography, Cunningham reinvented the genre and embraced straightforward images taken on the city streets, as opposed to the use of posed models.  Due to his fastidious approach to image making, and devotion to his craft, Bill Cunningham created an extraordinary body of work that not only captured the history of fashion, but also the zeitgeist of his time.

Born in 1929 and raised in Massachusetts, Cunningham briefly attended Harvard University before moving to New York City to pursue a career as a milliner.  After designing hats for a number of years, and working with bespoke retailers Chez Ninon, Cunningham observed women’s fashion trends moving away from headwear.  With this in mind, he then made the prescient transition to journalism.  Working as a columnist for Women’s Wear Daily and as a New York based reporter for The Chicago Tribune in the mid 1960s, Cunningham began what became a lifelong career in fashion journalism.  At first writing columns, and then publishing photographs beginning in 1967, Cunningham spent most of his career working for The New York Times.  However, guarding his freedom as a freelancer close, (he frequently contributed to noted fashion magazines such as Vogue and Town & Country, and helped launch Details in 1982) he did not officially join the staff until 1994.  Cunningham stayed on at The Times until his death in 2016.

Cunningham was a keen observer of the various intersections of cosmopolitan life.  His photographs captured clothing in the three arenas in which fashion is disseminated to the public: haute couture shows, parties and events, and most prominently, the street style of New York City and Paris.  The photographs depict the evolution of trends and attitudes that spoke to politics and moments of cultural transition.  Celebrities and everyday people alike found equal exposure through Cunningham’s lens.  His focus and pleasure was portraying arbiters of taste from Diane Vreeland, Anna Wintour, and Jacqueline Kennedy Onassis to people with distinct style who stood out among the many walking down Fifty-Seventh Street.

In the introduction of the 2019 publication Bill Cunningham: On the Street: Five Decades of Iconic Photography, Cathy Horyn, esteemed fashion critic and former writer for The New York Times, wrote: “[Bill] chronicled the first wave of women to ditch their heels and commute to work in sneakers, the return of the zoot suit, the phenomenon of low-riding jeans, the vogue for camouflage, and a hundred different ways New Yorkers stylishly brave a storm. He believed that a true portrait of fashion — and, by inference, the times — depended on seeing how real people dressed, whether kids in deconstructed sweatshirts or big spenders at a charity event. The runway wasn’t enough, so he hit the streets every day with his camera.”

As evidenced in his “Evening Hours” column for The New York Times, Cunningham seemingly never missed a high society event or party, attending sometimes up to twenty in one week.  He was able to commingle with guests, yet stay separate enough to create compelling and candid images.  However, Cunningham’s “On the Street” column was where the photographer’s eye and instinct – for people, clothes, and accessories – truly captured the verve of both the city that never sleeps and the city of light.  Additionally, much can be said about Cunningham’s humility and generosity.  Witnessing many friends be greatly affected by the AIDS epidemic, Cunningham donated millions to AIDS related charities during his lifetime.

Cunningham’s life and work have been written about in numerous publications, and have been the subject of an award-winning documentary, Bill Cunningham New York (2010) as well as the recently released The Times of Bill Cunningham (2018).  Additionally, at the time of his death, Cunningham left behind the manuscript of an autobiography which he titled Fashion Climbing, which was published posthumously in 2018.  The Bill Cunningham Foundation was established to promote and support Cunningham’s photographs and legacy.

All prints are vintage and likely unique.