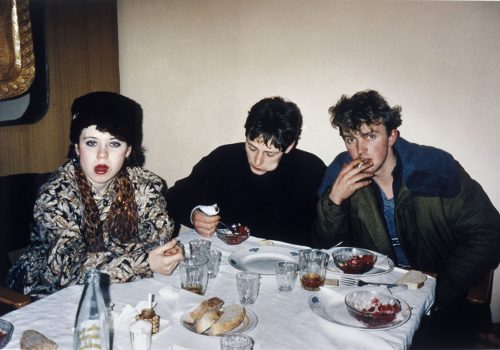 The Stedelijk Museum pays a unique tribute to an icon of documentary photography, the Dutch photographer Bertien van Manen (The Hague, 1942). Although her work has been collected for decades by museums like the Stedelijk, the Museum of Modern Art in New York and the Metropolitan Museum Tokyo, this will be the first major survey of her oeuvre in the world. In close liaison with Van Manen, the exhibition will combine each of her series with the work of another photographer, fourteen in total, including Nan Goldin, Boris Mikhailov and Rineke Dijkstra. This provides a counterpoint to Van Manen’s work, granting a broader context, emphasis, contrast or counterbalance.

Bertien van Manen started her career as a fashion photographer, but Robert Frank’s photo book The Americans (1958) inspired her to concentrate on her own projects, taking a spontaneous, unforced approach. She made lengthy, repeated trips to the Appalachians in the US, the former Soviet Union and China. The collection of the Stedelijk Museum holds over 80 photos from various projects, including the generous donation that Van Manen made in 2013 from her series Lets Sit Down Before We Go, Give Me Your Image and Vrouwen te Gast.

Van Manen’s work is rooted in classic (social) photo reportage in serious of straightforward black and white which, up until the 1980s, was an important genre. Gradually, she evolved a personal, poetic form of colour photography that reveals her enduring, highly personal relationships with her subjects. The common thread running through the exhibition is the various series that Van Manen has produced since the 1970s, from her autobiographical work and the first series in Budapest in the 1970s, the black and white series about female migrant workers and nuns in the 1980s, the stories about Russian and Chinese people coping with changes in society in the 1990s, her series documenting other people’s family photos at the start of this century, to the sensitive (landscape) photos taken after losing her husband in 2010.

The exhibition is structured visually and thematically rather than chronologically and features a total of 11 series by Bertien van Manen. Her work is shown in dialogue with photographers who, like Van Manen, often find their subjects in their immediate environment, and return to them repeatedly over prolonged periods of time.

An example of one such pairing is the series A Hundred Summers, A Hundred Winters, the work that Van Manen made in the USSR in the early nineties, which is contrasted with a work from the series Case History by Ukrainian photographer Boris Mikhailov. Where Van Manen’s work is empathetic and warm, Mikhailov’s sequence of staged images confronts us with the harrowing reality of the underbelly of Soviet society.

The other photographers presented with reference to the work of Bertien van Manen are Chris Killip (Douglas, Isle of Man, 1946), who documented the impact of deindustrialisation in England between 1973 and 1985; Jitka Hanzlova (Náchod, Czech Republic, 1958), who looks back with love and nostalgia at the village she left; Josef Koudelka (Boskovice, Czech Republic, 1938), who chronicled Roma communities in Europe; the abovementioned Robert Frank (Zurich, 1924, NY 2019); Nan Goldin (Washington, 1953), including an intimate and heartfelt ode to her flamboyant friend the artist Cookie Mueller; Wout Berger (Ridderkerk, 1941) with hyper-detailed images of nature; Seiichi Furuya (Izu, Japan, 1950) who spent years photographing his spouse who took her life in 1985; Guido Guidi (Cesena, Italy, 1941), who captures poetic images of his surroundings with a superb eye for light and mood; Rineke Dijkstra with one of her disarming Beach Portraits; Rahima Gambo (Abuja, Nigeria, 1986) with a painfully cheerful video of girls who resume school life after their kidnapping by Boko Haram; Newsha Tavakolian (Tehran, 1981), who tells the story of Iranian women forbidden to sing in public in silent video images; Stephen Gill (Bristol, UK, 1971), with photographs of animal behaviour, based equally on concept and fortuity; Martin McGagh (Donegal, Ireland, 1980), with a series about boys on the brink of manhood set against the backdrop of Irish suburbia.

The exhibition is counterbalanced by Imperial Courts (2017) the film installation by the Dutch photographer Dana Lixenberg (Amsterdam, 1964).