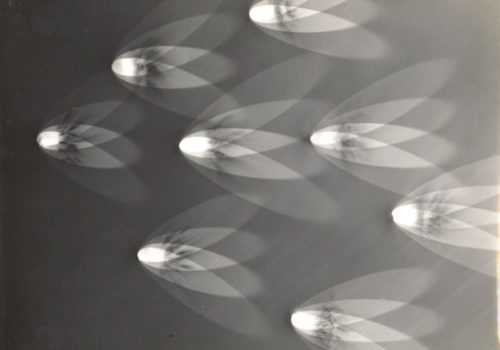 From Fall 2013 to Spring 2014, the Kicken gallery in Berlin held  a two-part, museum-worthy exhibition featuring hundred works from the “Subjective Photography” movement. The photographs were magnificent, as always at the Kicken, which specializes in vintage photography and works on paper. (The rare large format photographs from pictorialist photographer Heinrich Kühn on display in the basement are also a must-see.)

In the late 1940s in Germany, Otto Steinert (b. Saarbrücken, 1915 – d. Essen, 1978) and Peter Keetman founded the group Fotoform, organizing three exhibitions entitled Subjektive Fotografie in 1951, 1954 and 1958, which earned the movement international recognition. The photographic experiments of the Surrealists and the Bauhaus Group had been interrupted by World War II. The artists of Fotoform picked up where they left off, becoming a second avant-garde.

Artists in the Subjective Photography movement played with reality, and the images they produce play with the viewer’s gaze. What are we being shown? What do we see? Sometimes it’s difficult to tell since the subject is so plain: a shadow, a line, a shape. The experiments are endless; the results are deeply pleasing.

The movement spread internationally and its members were from Europe, Asia and America. Otto Steinert, Siegfried Lauterwasser, Ludwig Windstosser, Toni Schneiders, and Peter Keetman from the Fotoform group were based in Germany. Kiyoshi Niiyama and Takashi Kijima were in Japan. Christer Strömholm was Swedish. Harry Callahan and Aaron Siskind represented the American heritage of László Moholy-Nagy’s new Bauhaus, while Thomaz Farkas, Gaspar Gasparian, and Marcel Giró were part of the São Paulo school.

Faced with controversy from the start, Steinert responded to his critics by saying that the experiments were a kind of visual research, and that they would be unpopular initially but would find an audience in the future. In the late 1950s, after three major exhibition, the conclusion was obvious. Six decades later, we can only confirm the international influence of the Subjective Photography movement.

Rudolf Kicken has worked since the beginning with the Otto Steinert archives, from which several important pieces are being exhibited alongside the works of other major German figures. In addition to these iconic works, the gallery is exhibiting neglected ones which are now available on the market.