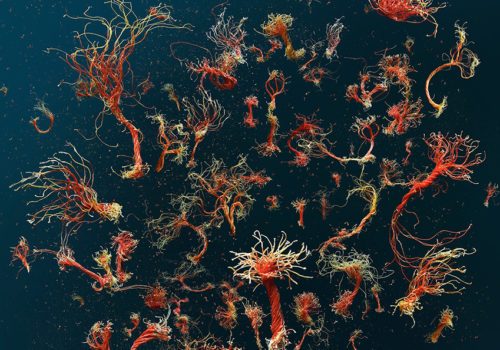 SOUP is a description given to plastic debris suspended in the sea, and with particular reference to the mass accumulation that exists in an area of The North Pacific Ocean known as the Garbage Patch. The series of images aim to engage with, and stimulate an emotional response in the viewer by combining a contradiction between initial aesthetic attraction and social awareness. The sequence reveals a narrative concerning oceanic plastics from initial attraction and attempted ingestion, to the ultimate death of sea creatures and representing the disturbing statistics of dispersed plastics having no boundaries.

All the plastics photographed have been salvaged from beaches around the world and represent a global collection of debris that has existed for varying amounts of time in the world’s oceans.

The captions record the plastic ingredients in each image providing the viewer with the realisation and facts of what exists in the sea.

Mandy Barker (b. 1964, UK) studied MA Photography at De Montfort University, England. Working with scientists for over ten years she is dedicated to raising awareness about plastic pollution in the world’s oceans. Her work highlights current research concerning the detrimental effects of plastic on marine life and ultimately ourselves, with the intention to lead people to action and change.

Barker is an award-winning photographer shortlisted for the Prix Pictet Award SPACE in 2017, and is a recipient of the 2018 National Geographic Society Grant for Research and Exploration. She has also been nominated for the Magnum Foundation Fund. Her work has been published in over 50 countries including National Geographic, Time, The Guardian, Smithsonian, and New Scientist, and she regularly takes part in interviews with the BBC, ITV, Greenpeace, Vice, and CNN. Her work has been exhibited world-wide from the Victoria & Albert Museum in London, to the Science and Technology Park in Hong Kong, and at over 30 different photo festivals. In 2019 alone, Barker’s work has been featured in over 25 exhibitions around the world including four major solo presentations at Fotografiska – Stockholm and Tallinn, at The Royal Photographic Society and at Impressions Gallery, England, UK.

In 2012 she was awarded The Royal Photographic Society’s Environmental Bursary enabling her to join scientists in a research expedition which sailed from Japan to Hawaii to examine the accumulation of marine plastic debris in the tsunami debris field in the Pacific Ocean. In June 2017 she was invited by Greenpeace to join the Beluga II Expedition which sailed around the remote and unique island locations of the Inner Hebrides, Scotland, to recover plastic debris in a commission for Greenpeace. Barker speaks internationally about her work to engage people with the plastic issue. She has been invited as a guest speaker at the National Geographic Photography Seminar 2018, Washington DC, Stanford University California, on behalf of the British Embassy and the British Council at the political festival Almedalen, Sweden, and as the opening keynote speaker for the EuroConference GlobalCapital Sustainable & Responsible Capital Markets Forum in Amsterdam.

In June 2019 Barker took part in the ‘Henderson Island Plastic Pollution Expedition’ which has been awarded the title of an ‘Explorers Club Flag Expedition’. With only 3 – 5 expeditions per year recognised in this way – previous others having included the Apollo 11 Space Mission, and the dive to Challenger Deep – this significant achievement that included recording data as well as photographing marine plastic pollution, will now become part of the archives, and be accessible to other modern day explorers and scholars.

“Art alone cannot change the world. But by bringing attention to marine plastic pollution in this way, it is hoped my work will help inform, and raise awareness about this issue of climate change, and in doing so encourage a wider audience to want to do something about it”.