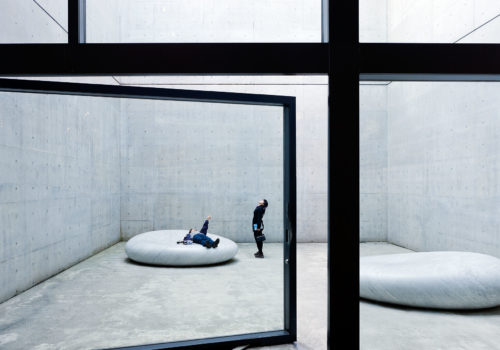 Iwan Baan’s everyday is in a constant state of flux, a way of life he has had since the age of 20. Yet this incessant mobility has enabled him to encapsulate the character behind the immobile, profound architecture around the world including Rem Koolhaas’ CCTV, Herzog and Demeuron’s Vitra House and SANAA’s Inujma’s Arthouse Project. With a 2010 Julius Shulman Award and several published books tucked neatly under his belt, Iwan continues to document architecture and its relationship to its social and geographical surroundings as one of the most notable practicing architectural photographers today.

We met on the 66th floor of The Park Hyatt in Beijing, enveloped by the aerial view of Beijing’s pulsating cityscape, a coincidental visual compliment to the topics of discussion – Iwan’s approach to architectural photography, meaningful architecture in Africa, and one of his recent books Insular Insight.

Can you tell us about your background and how you became involved with photography?

I grew up in the Netherlands, and on my 12th birthday, I received a camera, the Agfa Clack. The shutter could open and close, which was about all it was able to do. A random gift by my grandmother ignited my interest in photography and eventually brought me to where I am today.

Specializing in architectural photography was also a bit unplanned. A longtime friend from Amsterdam, Lok Jansen who freelanced with Rem Koolhaas, happened to be working on the Europe Exhibition in Brussels. I thought it would be interesting do an interactive program, a panorama of it and made a proposal. After my proposal sat on Rem Koolhaas’s desk for what felt like a year, I received a call from OMA to present my idea to Rem. He took to it, and we started working on many projects. Since that day my photography around architecture never stopped.

Being passionate about documentary photography and covering a wide range of subjects prior to focusing on architecture, is there a different approach when shooting architecture?

If I look back to my old pictures, it has always been about space and people and how people interact with space, so my approach has not changed.

I work with a very wide range of architects, but I’m selective of the work I take on. In addition to the architecture, the project should also be about the city, the location, the roots of the place, and how the building is built in relationship with the place. There should be an intention behind the building, and I try to tell that story in terms of pictures. Just shooting office buildings has no interest for me.
There are projects I’m involved in which incorporates cutting edge architecture and design. And there’s other work I do that is more about the place and people. For example, the design in Africa can be low key in terms of use and significance for the place but transformative for the people who use it which is big. It’s not about flashy architecture, but about the thoughtful approach for that location and its function. There wasn’t much coverage of architecture and design in Africa which made me interested in the topic even more.

What have you been covering in Africa?

Last year, I was in Timbuktu in Mali, a city with barely any architecture. Timbuktu, during the 12th century, was the center point of knowledge in Africa. It was a major transit point between the Middle East and the coast of Africa.

I was shooting a library next to the oldest mosque there, The Great Mosque (Djinguereber), built in 1327. The mosque originally housed a huge trove of Islamic manuscripts about everything, law, society, etc. When Timbuktu was colonized, a lot of the manuscripts were looted, and so select residents removed the manuscripts and buried them in the desert to protect them. An old trove of 500-600 year-old manuscripts was scattered around the desert in private houses and homes.

Later on, an initiative from UNESCO and the South African government to build a library in the center of Timbuktu helped solidify the history and importance of the people who lived there. They encouraged those who protected the old manuscripts to bring them to the library where they could be shared publicly once again.
I also had recently shot a hospital which a young architect, Michael Murphy, had initiated in Africa. He had just graduated from Harvard but was a student when he approached the Clinton Foundation to build a hospital pro-bono in Africa. Soon after, Michael with the help of other Harvard students trained 3500 local people to build the hospital with affordable, local materials. It was a beautifully designed hospital embedded in the mountains, built with a remarkable budget of only 2 million dollars.
These projects focus less on the architecture but the story that revolves around the architecture.

Do you lean towards one style of architecture?

No. I try to approach my projects with a blank slate. And I think not having a background in architecture helps. I look at the project in a larger scale and then look into the details of it. I try to capture that amazement that a first time visitor would experience. Simultaneously, helicopter shots allow me to step away and grasp the bigger picture, the context and the place, which helps to better understand the architect’s design decisions and how the building may juxtapose or interweave with the environment.

Tell us about Insular Insight.

Soichiro Fukutake, started his personal project 20 years ago, to help revitalize the Inushima, Naoshima and Teshima islands. He had a vision to transform the area with artist engagement and local resident participation to develop “public capitalism” and bring back the importance of the islands. World class international artists were invited to create work specific to the space, and museums designed by Japanese architects were also built. Locals are encouraged to create their own guesthouses for visitors, and also have opportunities to work in and around the museums, shaping the landscape with their own personal touches. With Fukutake’s support, a vibrant, new economy was created in a place that may have otherwise been written off. Insular Insight is a book that encapsulates the stories of the islands, its past, present and future.  The islands are difficult to get to, it takes 5-6 hours to arrive coming from Tokyo. It’s not on every tourist map which makes this experience even more meaningful for visitors. It’s a journey and involves a time commitment to fully experience the islands.
When you arrive, you are also introduced to the history of the islands. During Japanese industrialization, one island was a refinery, the other a copper mine, and the third a landfill. After the industrial age, they became neglected with much of the original population leaving to pursue other opportunities in major cities.
On one side, the Islands depict old Japan with its wooden houses, farming, scenic landscapes and the remaining residents, most are in their 70’s. Yet everyday, there’s this huge influx of young, city visitors creating a strange mix of old and new, one of the vision Fukutake had.

How did it come about? How long did it take to produce from your end?

I had taken two trips for a week or so to capture the islands especially for the book. However, I had been to the islands three times prior for separate projects to cover specific architectural projects for Sejima, SANAA, etc. The book is a culmination of the work. The final picture selection and our final image sequence were put together in two days with Lars Müller in Zurich. It fell into place quite fast.

Can you describe a unique spatial experience you had with this project?

The Teshima Art Museum was an unforgettable experience because it didn’t have an assuming purpose. The museum is not just a structure or space, but is about how the art and landscape frame each other. I stepped into this world I’ve never seen before, an open void, 40×80 meters. The art, the water drops running on the floor is unassuming until you focus on it and realize its deep layers as they reflect their surroundings back at you.

What did you enjoy most about the project?

It was nice to collaborate with people of varied backgrounds- architecture, art, photography and philosophy. We all contributed to the overview of the islands, which enriched the book.