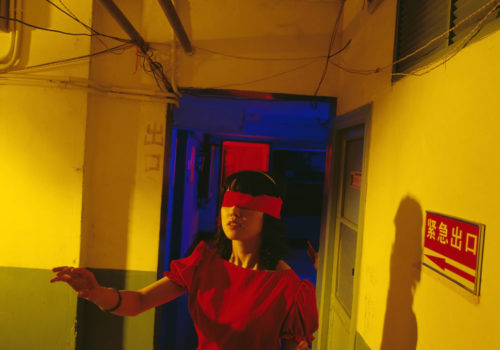 Lijie Liu is a photographer who commits much of her free time expressing feelings and perspectives which many females experience throughout their lives. Born in 1973 in Shenyang, Liaoning Province, she moved to Beijing in 2004 where two years later, her Another Episode series was born.

With 27 scenes to date, Lijie envelopes a vividly colored and saturated beauty all the while encasing layers of perceived psychological tension, uneasiness and reality. Fabricated scenes are used as backdrops to articulate real human situations from the female perspective, crossing cultural boundaries. One can’t help but think of western photographers like Jeff Wall and Gregory Crewdson when it comes to experiencing her carefully crafted scenes.

How did you get into photography?

My father worked for a bank, and so I worked for a bank for almost 10 years. Many of my peers and I, born in the 1970’s, tended to follow a traditional career path, rarely straying from the norm. However, I decided to address my inner calling and went to The Beijing Film Academy to study photography. I had visited a friend’s teacher’s studio that housed many great works of photographers. This experience in addition to reading some photography books compelled me to explore the field more seriously.

Can you tell us about your “Another Episode” series?

Many viewers assume that the scenes in the episodes are imagined, but in fact, these are natural expressions based on personal thoughts or experiences.

Ever since I was young, I’ve been sensitive to details, to the “little” things happening in my life. And I enjoy creating scenes where these feelings are embedded, each scene connecting with the other. I enjoy sharing them with the public and having the viewers develop their own relationship with the image.

At this point, it is comprised of 2 parts. One part revolves around a young girl wearing a red dress, under 20 years old. It touches on her youthfulness and the issues she encounters around this age. The 2nd part revolves around an older woman wearing a white dress, where experiences based off of a mature woman in a fast moving society are expressed.

“Another Episode II – 14” addresses beauty and identity. I created this scene in the hospital where a woman is lying on a surgeon’s table. The line on the woman’s face indicates that she is having plastic surgery. If your face identifies you, then changing your face could give you a different identity. It also suggests a kind of death, the ending of the old and beginning of the new. I like the contrast between the beautiful woman and inviting colors to the cold operation room and the cut on her face.

“Another Episode II – 16” has a girl lounging on a yellow sofa enjoying a lazy afternoon. At the same time, a reflected image from the mirror reveals a voyeur watching her. Again, among beauty and ease there is ugliness and uneasiness.

And your favorites are?

“Another Episode II – 25” has a lifeless girl lying in the meadow filled with flowers. She is enframed by the flowers in the shape of a coffin, representing a kind of beauty after death. The scene illustrates a freedom or release from the difficulties of everyday life.

The second is “Another Episode II – 22” where the girl is in the car with her boss. The heavy cloud pushes towards the roof of the car creating tension. The boss is sexually harassing her, and the girl who is uncomfortable doesn’t know if she should take it or reject it.

And lastly, in “Another Episode II – 23”, there is a hotel room. A guy is lying in bed holding a remote control, and a girl is standing in front of him. It is not clear whether the guy is controlling the television or controlling the woman.

What kind of production was necessary to create these scenes, and how do you envision your next episode?

Creating these scenes is like creating movie scenes. It took a combined 2 years to create all 27 episodes with many days of pre-production and post-production. Everything is carefully planned with initial sketches indicating composition, color placement and subject placement to appropriately express the particular feeling I’m focusing on.

I’m currently having thoughts of having a child. However, raising a child as a single mother and without a father is not an easy situation. My next episode will most likely address this issue.

This series is the main focus of my work and will continue to be through my lifetime. I want to show different stages that many women go through, to share their stories.

This interview was conducted and edited by CYJO.
Interview Translator: Yanyan Liu