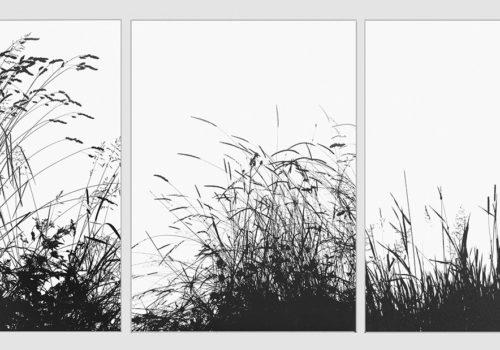 For the first exhibition of the season, the gallery presents the exhibition “E blanc” by Patrick Bailly-Maître-Grand.

In one of his poems (*), Arthur Rimbaud gave colors to his vowels. The E is white.

In a very analogical way, it seemed to me that some of my works possessed together a kind of elementary grammar which neither the theme nor the date of creation could bring together, except for a haunting white tonality that coats the subject represented in a sort of void, provided by the photographic paper itself.

Finally, in this exhibition, my selection of “type E” photographs shows the luminous combat, between the plaster powder and the imprint, the immaculate cardboard and the support paper, the intense sunlight which writes a few shadows, or else relics haloed in pure white.

May the “viewer” perceive in it a need for freedom and escape, the exact opposite of those dark images (Rimbaud’s black A’s) which, however, often populate my other works. But, after all, isn’t photography precisely this black “writing” created with the whiteness of light, A born from E?…

Patrick Bailly-Maître-Grand was born on February 1, 1945 in Paris. Graduated in physical sciences (master’s degree at the Faculty of Sciences of Paris Jussieu) in 1969, his career as an artist began in 1979 with painting. From the 1980s, his artistic research directed him towards photography. He explores photography as a process of revelation, like science. His work highlights the photographic fact, its physics, through the exploration of several techniques such as the daguerreotype, which fixes the image in detail, in its depth. Patrick Bailly-Maître-Grand works in series, as if by experience, by declining his subjects, to extract their meaning. By refusing to work with new technologies, he places photography as a privileged medium between aesthetics and the chemical process. The artist develops his prints himself, where he adds turns and colorings, in the same way as a chemist in his laboratory. He reinvests the history of techniques and takes us through the processes whose properties he exploits in reverse: light becomes matter, substance becomes evanescence. His master: Etienne Jules Marey. His inspiration: his collections of anonymous photographs. The works of Patrick Bailly-Maître-Grand have been exhibited internationally and are part of the collections of major museums such as MoMa, Pompidou Center, FNAC, National Museum of Victoria, Sainsbury Center for Visual Arts in Norwich ( GB), the Strasbourg Museum of Modern and Contemporary Art or the Museet for Fotokunst Odense…