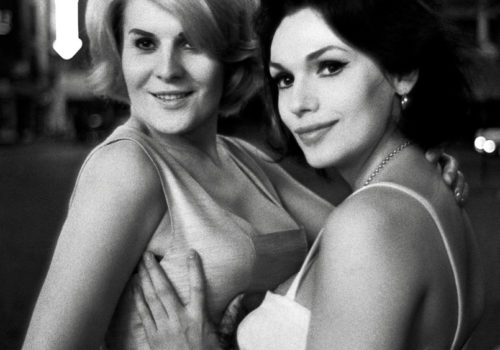 It seems like such an obvious choice that it’s surprising this exhibition is being held for the first time. By bringing together the iconic work of Christer Strömholm and Anders Petersen, the Fundacio Foto Colectania in Barcelona is making history. Remarkably displayed, these high-quality prints, including several sumptuous vintage ones, set up a dialogue exploring what their photography has in common.

On the ground floor, Petersen’s Café Lehmitz unfolds smoothly, with its its drunks and bums and sailors and pimps and pinball—seen on the cover of the Tom Waits album Rain Dogs—exuding tenderness. Petersen took these pictures over the course of three years in Hamburg while still a student at a school then led by Christer Strömholm in Stockholm. The experience led him to describe his photographs as a challenge measured by distance: “To take a good picture, you have to have one foot inside and one foot outside. My problem is that I always end up with both feet inside.” In this marginal world, Petersen observes the intensity of the feeling and the profound truth in each moment.

Upstairs, we follow Christer Strömhold out into the Parisian nightlife of Pigalle and the Place Blanche, with his “friends,” the transvestites and transsexuals whom he follows late into the night at local hotels, where he also lives. Portraits, nudes, relationships, deep stares and deep black colors, life is present, but marginal, in a closed-off world for these, “women who had the misfortune of being born in a male body.” As with Petersen, but with a completely different aesthetic, the tenderness and mutual respect are palpable in each image.

The dialogue is moving—we see in Petersen direct echoes of Strömholm when two girls share a kiss—while raising questions about connections between both photographers. Petersen and Strömholm had a kind of father-son relationship. After years of teaching and discussions, they remained, until Strömholm’s death, the closest of friends. And yet why do Strömholm’s most outstanding students share nothing in common with his aesthetic ? What did he pass on to them? It was a conception of life and values, a way of being oneself, to never judge, to find the right place and distance, and never to cheat. It might be called “humanism.” This exhibition pays tribute to this approach in which their two different voices sing the same notes. It’s astounding.