August Sander: Portraits in the face of oblivion 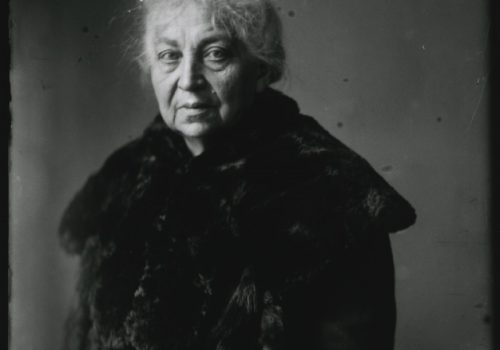 The German photographer immortalized Cologne Jews persecuted by the Nazis on the eve of World War II. An exhibition at the Shoah Memorial in Paris pays homage to this endeavor, showing for the first time some of those faces.

Being a Jew in Germany in 1938 was not a good thing. Since 1933, members of the National Socialist Party had been harassing Jewish communities around the country, and in 1938, Jews were required to obtain new identification papers displaying the letter J (for “Jude”) and a yellow star. For their new papers they needed new photographs, which is what brought them to August Sander’s photo studio, allowing the photographer to capture their tormented faces.

August Sander (1876–1964) was by then an accomplished artist who, in addition to his commercial practice, was developing a project of colossal magnitude: he wanted to create a portrait of the society in which he lived and which roughly overlapped with the period of the Weimar Republic in Germany, between 1918 and 1933. This endeavor, entitled “People of the 20th Century,” would try capture all the faces of his era, including bakers, the unemployed, industrialists, young peasants, and aging widows.

Without a doubt, Sander possessed an unparalleled talent for capturing the people around him, and always combined a neutral facial expression with an eloquent body posture. The frozen gestures of the characters he photographed epitomize the overall attitude of the model. We recognize a pastry chef proudly posing with his pot, the bricklayer balancing his bricks on his back, and the pianist clutching sheet music under his arm. August Sander gently ushers us into his time, and his portraits are so lifelike we feel like the sole judges in scenes taken from reality.

This is true more than ever of the exhibition at the Shoah Memorial in Paris. The 45 portfolios compiled by the photographer included a series of portraits of persecutors and of the persecuted. In the late 1930s, August Sander, whose book The Face of Our Time had been banned in 1936, began randomly photographing members of the Nazi Party and the Jews whom the Nazis humiliated and assaulted.

Out in the open

“He was determined to record the portrait of his time,” explains Gerd Sander, the photographer’s grandson, adding: “Sander’s ambition was to show a cross-section of contemporary German society. That’s why he photographed the Nazis just as he did the Jews. His photographs refrained from judgment. He left this task to our care.” At the Shoah Memorial, portraits of Jews, political prisoners, foreign laborers, and Nazi officials are thus brought together in a single room. Facing one another, they are arranged in a circle, which give more freedom to the eye. It is possible to take in at a glance the totality of the photographs by spinning around, making eye contact with an SS Sturmbannführer and at the same time meeting the eyes of a Jewish father who was bullied by the Nazis. “This is how we wanted to show this work,” Gerd Sander continues, “as a whole that remains faithful to the spirit of August Sander. We wanted to bring every face of the German society of his time out into the open, even though we are well aware of what happened next.”

After the war, August Sander did indeed add the section “The Persecuted” to his People of the 20th Century. His son, Erich, took portraits of war prisoners he met in a camp, where he himself had been interned since 1934 for his membership to the Communist Party; these portraits would come to enlarge his father’s oeuvre. During the war, many of August Sander’s negatives had perished, along with his notebook in which he had scrupulously recorded the names of the people he had photographed. In preparation for the exhibition, with the help of the NS-Dokumentationszentrum in Cologne, researchers uncovered the names and the stories of the models. We thus learn, for instance, which concentration camps people were deported to and that they never returned. The faces of the Jews persecuted during World War II are featured in the last room of the exhibition, along with their places of origin and their life stories. These faces had never been shown before; August Sander had selected twelve to be included in his book and set the rest aside. “It is extremely important to us to be able to exhibit here, at the Shoah Memorial, and share these portraits with the public,” says Julian Sander, the photographer’s great-grandson. It must be said that, thanks to Sander’s immense talent, these portraits convey the full force of the events and remind us what these people suffered. As if taking revenge against history, we are called on as judges before these poignant portraits to welcome them into the Pantheon of twentieth-century martyrs.