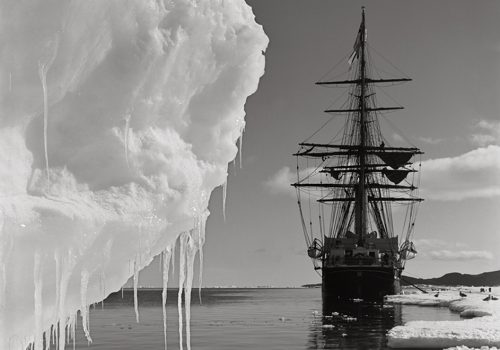 The exhibition Endurance and the Great White Silence at Atlas Gallery brings together the most famous and most influential photographs of Antarctica ever taken in superb new platinum-palladium prints. It is also the first time these images by three legendary Antarctic names – Scott, Ponting and Hurley – have been exhibited together. The photographs by Herbert Ponting (1870-1935), Captain Scott’s official photographer on his final expedition, and Frank Hurley (1885-1962), Ernest Shackleton’s photographer on the Endurance expedition, are complemented by a number of Scott’s own photographs taken in 1911 as he headed towards the South Pole.

“Setting their extraordinary stories aside, these are some of the greatest landscapes ever taken and are, from a photographic point of view, comparable to the work of the great landscape photographers of the 20th century,” says Atlas Gallery director Ben Burdett. “And these limited-edition prints by Salto Ulbeek Publishers, world leaders in platinum-palladium printing, are definitive prints of photographs from the collections of the Scott Polar Research Institute, University of Cambridge and the Royal Geographical Society (with IBG).

Before Ponting and Hurley’s photographs were published, there were few images of the mysterious icebound southern continent. “These photographs are the foundational images of Antarctica and among the first images through which the wider public discovered Antarctica visually,” says Jean de Pomereu, co-editor at Salto Ulbeek Publishers, who is himself a seasoned Antarctic photographer. “Photography being reproduceable suddenly brought Antarctica to a wider public. As well as providing an unparalleled historic record, their depiction of the vast frozen landscapes, ice sheets and bergs greatly influenced how the continent has been regarded since. These photographs are the first chapter of Antarctic photography – they touch on the sublime and are imbued with romanticism.”

As well as introducing an entire new realm at the ‘end of the earth’, the photographs brought viewers face to face with the explorer-heroes and their daily lives during the long months aboard fragile ships, with the animals that were destined to be both transport and food, then the sled treks across vast white wastes. Herbert Ponting reveals other-worldly vistas, such as Beautiful, broken ice, reflections and Terra Nova and Erebus and dome cloud from West Beach; but he also shows us Captain Oates and some of the ponies, a gentle hand on the neck of one. The poignant image is tinged with foreboding. In Ponting’s individual three-quarter portraits, we meet weather-beaten men with goggle marks on their serious, self-contained, faces but we also see them larking about in the snow, their life in huts and tents, and tiny figures sledding through the towers of ice and snow.

Too old to make the trek to the pole, Ponting left for London in February 1912 with his photographs, but not before he taught Captain Scott (1868-1912) to use the camera. “Scott’s photographs document an incredible physical endeavour and, with Ponting as his teacher, he developed an eye and considerable ability,” says Ben Burdett. “These images were found in the Ponting archive some years ago – until then, no one had realised they were Scott’s own photographs.” Scott took them between September and mid-December 1911 and sent the exposed negatives back to Cape Evans with a supporting party. Scott died at the end of March 1912, on his return from the South Pole.

Australian photographer Frank Hurley accompanied Ernest Shackleton on his Imperial Trans- Antarctic Expedition. Setting sail in 1914, the Endurance became trapped in pack ice in the Weddell Sea and the men never landed on the Antarctic mainland. Instead, months later, they were forced to abandon ship but, before she sank, Hurley and Shackleton saved some 200 glass and celluloid negatives, all the weight they could afford. After months camped on the drifting ice, the men managed to land on Elephant Island. There, most waited while Shackleton and five crew set sail to South Georgia for help in a small open boat. The expedition and its rescue is one of the greatest stories of survival, gripping the public imagination for generations.

Hurley, who was both photographer and protagonist, offers an astounding record of that voyage and escape. One crew member wrote that he was “a warrior with his camera & would go anywhere or do anything to get a picture”. Always willing to improvise in search of a new angle, Hurley climbed high into the rigging with heavy camera, tripod and boxes of glass plates, and lugged them over dangerous expanses of ice to capture precisely his desired composition. Hurley’s photographic skill is evident in his handling of both the monumental icy landscape and his images of the confined life below decks during the dark Antarctic winter. His photographs capture the crew, disciplined and purposeful, at work with charts, microscope and test tubes; and, at rest, reading, playing dominoes in the last months on board before the final demise of Endurance and the beginning of their long journey to safety.

Endurance and the Great White Silence