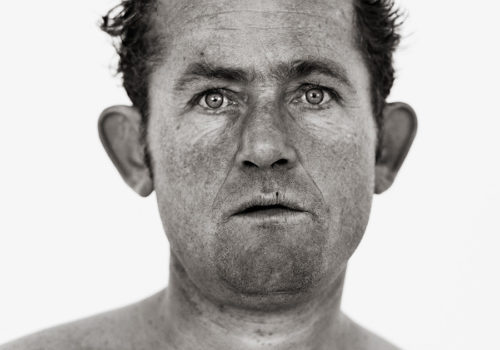 Homeless, Bryan Adams’ series of photographic portraits of The Big Issue magazine vendors is being shown in the UK for the first time, in an exhibition at Atlas Gallery, London W1. Photographed between 2011 and 2018, the project started as a commission for The Big Issue by guest editor Trudie Styler, the actor and director.

Adams was inspired to accept her challenge because, he says, of the homelessness he had seen in his hometown of Vancouver and on the road as an international musician, in places from Chicago to Calais – “almost every city around the world has a similar problem: too many people fall between the cracks and have no means to sustain a roof over their head.”

For more than twenty years, Adams the singer-songwriter has had a parallel career as a photographer, particularly renowned for his images of creative celebrities, the great and the good, portraits that stand out for their unexpected openness, sense of connection and, often, their sheer delight. It is exactly these qualities that light up these portraits of The Big Issue sellers. Adams introduces us to men and women comfortable in their own skin, who present themselves with grace and directness born of trust in the man behind the camera. There is laughter, introspection and poise, life restored. This is self-exposure but, above all, during the continuing pandemic, these portraits are a stark reminder that there are still far too many homeless people on the streets in towns and cities everywhere.

The Big Issue newspaper was founded by Lord John Bird and Gordon Roddick in 1991 as a response to the increasing number of homeless and vulnerably housed people in London, offering homeless vendors a “hand up not a hand-out”. It has inspired more than 100 similar magazines in 35 countries, including Big Issue France, started in 1993.

Bryan Adams makes us all look again. “There is nothing nice or exotic about them,” says Lord Bird. “They are not the sad faces of the poor and troubled. They are each unique individuals that Bryan has recorded and held for us to think on… The geography of their individual faces and their bodies. Their hard knocks and rough nights out are in evidence everywhere. No one passes through life this way without that accumulation of evidence.”

Each sitter is shown against a plain studio background, away from the viewer’s preconceptions, and the final image more often than not is black and white. Nothing distracts from the connection with the sitter and their spontaneous feelings sparked by Adams.

“There is energy in this group,” said Lord Bird. “They are more than their passage through life. They are at times canny, funny, handsome, marked, sharp or thoughtful. And sometimes they are more than anything we can say about them; like all those whose circumstances have taken to the street. I know that in my looking at them, in our looking at them, they are just as much looking back at us.”

Given the opportunity by Bryan Adams to select a group of his photographs for an exhibition this year, Ben Burdett, director of Atlas Gallery, did not hesitate to request these particular portraits: “During the last year, many of us have been in our homes appreciating the protection and sanctuary they offer, and that has made me think deeply about people who have no homes in which to take refuge,” says Burdett. “However isolated we may feel during lockdown, those without families, or even four walls to retreat to, are more on the edge than ever. Bryan’s photographs are a powerful reminder.”