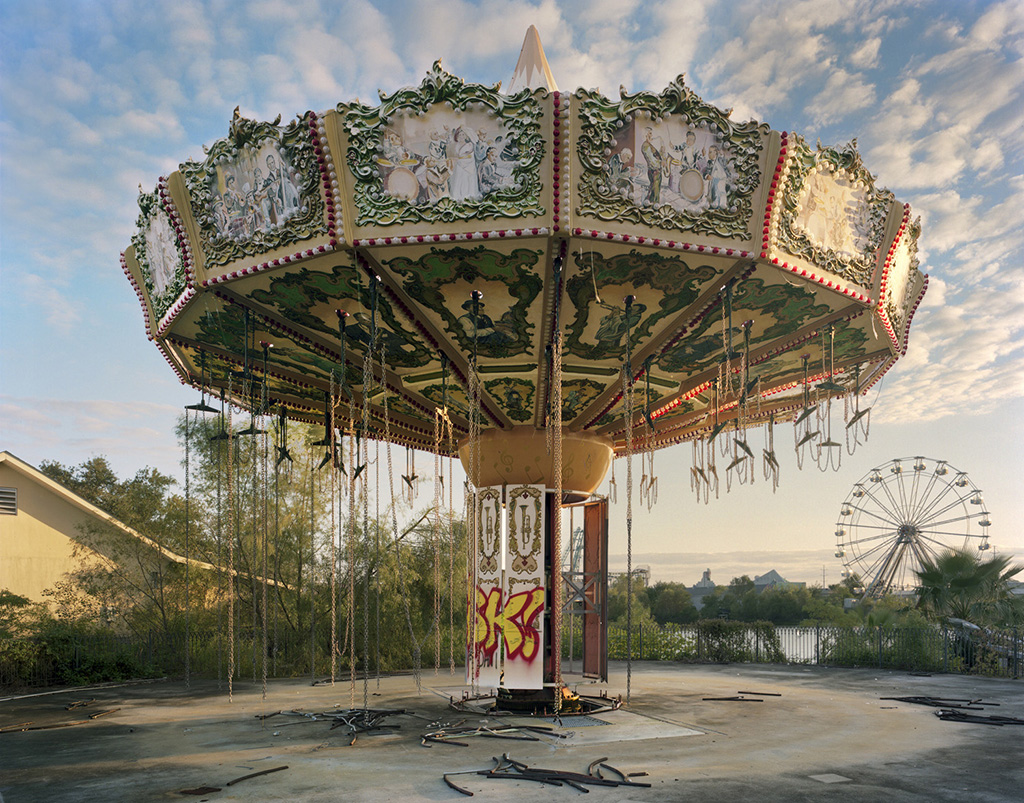 Portraying the South can be an intimidating endeavor for many photographers. This is not only true because there is a long legacy of photographers who have done so in a remarkable way, but also because the South is a region that continues to struggle with its identity, torn by its racial past and ambivalent present.

It comes as no surprise that revisiting the South is a project that attracted Andrew Moore, a photographer known for his exploration of places in transformation and the documentation of “life in flux.” In previous projects, he explored the faded splendor of Cuba’s capital, (Inside Havana, 2002), post-Soviet Russia (Russia: Beyond Utopia, 2005); more recently he focused his attention on the vacant buildings and defeated neighborhoods of Detroit (Detroit Disassembled, (2010).

The South, his current series at Jackson Fine Art gallery in Atlanta, feels like a natural continuation of this work. In his photographs, Moore depicts a South that confronts itself with its past, finding places at the intersection of beauty and decrepitude. He proceeded by investigating distinctive places that were both familiar and unfamiliar to him. Although he was born in Connecticut, both of his parents are from the South and he lived for a short time in New Orleans. He now lives in New York City.

In New Orleans, for instance, he photographed an abandoned carousel, immobile and still beautiful despite being afflicted by taggers. This image carries a feeling of emptiness and desolation that is a stark reminder of Katrina’s legacy (Zydeco Zinger, 2012).

In another photograph, Mrs. Clara Hornsby, Twiggs St, Moore frames an old, seemingly abandoned two-story house, reminiscent of grandiose times long gone, in Augusta, Georgia. An elegantly dressed woman in a bright yellow dress and green jacket poses in front of the entrance gate. She knew the house and is part of its history. In his gallery talk, Moore said the presence of Mrs. Hornsby gives the image its complexity, by juxtaposing past and present. “We know where we are in time, but there is also something that allows you to project back into the past.”

Moore is known for working with large format and these are no exception. His prints are immense: 30×60 inch, some even 50×60 inch. It is a deliberate attempt of Moore’s to pull the viewer closer into the photograph, as if to “step into the frame and take advantage of deep space in the image.”

The cohesiveness of this series comes from its tonalities and the palette of colors Moore uses: green, as expected, but also blue and reds, such as in Church Interior, Clarksdale, Mississippi (2014). The South is a place that has so much colors, Moore noted in his talk, and that is why “for color photographers in the late seventies, the South was the place to go.”

Both the unusual dimensions of his photographs and his subject matter give a distinction to his work. Although he said he approached this project “with a certain amount of trepidation about what I could do that was different” from his predecessors, his series-in-progress promises to become a meaningful addition to the representation of the South.