Atlanta: The 50th Anniversary of the Selma March by Steve Schapiro 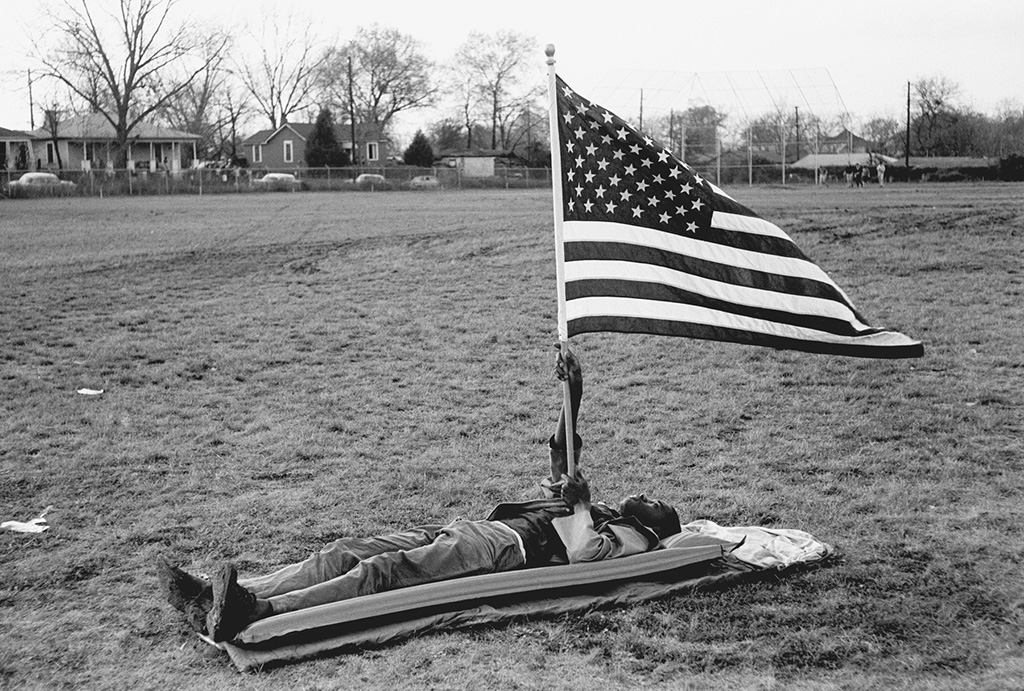 A half-century ago, the Selma-to-Montgomery march for voting rights was to become the epicenter of events that would mark the history of the civil rights movement. In 1965, Steve Schapiro was among the photographers who chronicled the five-day, 54-mile route that took Martin Luther King Jr. and his followers from Selma to the state capital, Montgomery, Alabama.

His work is currently on view at the Jackson Fine Art gallery in Atlanta, along with the main exhibit on Gordon Parks, entitled Gordon Parks: Segregation Story (which is also currently at the High Museum).

Unlike Parks, who was a staff photographer for Life, Schapiro freelanced for the magazine. Influenced early in his career by W. Eugene Smith, with whom he studied, he developed an interest in covering social issues and the civil rights movement in the early 60’s.

It comes as no surprise that he decided to cover the Selma marches. His pictures chronicle this troubled time with humanity and eloquence. They capture the spirit of the march powerfully, whether by tightly focusing on the expressions of demonstrators, or by freezing meaningful instants of the moving crowd in a single frame.

In one of his photographs, for example, he singled out a boy holding an American flag as he laid down on an air mattress in an open field. Another one provides a powerful overview of the march, where we see King in the forefront flanked by his lieutenants and followed by a long line of protesters.

Beyond the quality of the work, what is remarkable is the fact that these photographs have never been edited, published, or even printed before. Schapiro rediscovered them very recently, some of them no more than two months prior to the Atlanta show.

“It was amazing to find so many images that I never even noticed and that editors at Life and other places had never noticed as well,” remarked Schapiro.

Great photographs pass the test of time and Schapiro’s work definitively fits in this category. Fifty years after being taken, his photographs have retained their emotional power.

During his gallery talk, Schapiro remarked that he did not realize their historical importance then. “You just hoped that they would appear in the magazine the following week,” he said.

Although he covered the events with four cameras, two for color and two for black and white, he said he favored the black-and-white format (which was also how Life magazine would publish the pictures most of the time.) In his view, black and white is inherently more emotional and better suited to convey a message without the distraction of colors.

Eventually Schapiro would make greater use of color as his career morphed from photojournalism to the coverage of the movie industry and celebrities in LA. Now in his eighties, he is still busy with projects, the latest being Bliss, an exploration of contemporary hippie culture.

Taschen is publishing a book of his Civil Rights photographs from 1963 through 1968 which will be out in several months and includes a section heavily influenced by James Baldwin and his “The Fire Next Time” essay which started my involvement in photographing the Non-Violent Movement”.
Fahey/Klein Gallery will  have a large exhibition in Los Angeles about Selma opening on March 26th in which Schapiro and several other Civil Rights photographers will participate.

“Almost fifty years after photographing the Selma March for Life Magazine, I decided to look back at my contact sheets from that period.

In the 60’s, as a photographer, you would send each day’s film you shot, overnight to the New York lab for processing. An editor would then go through the negatives and clip a small circle in the sprocket holes of what they thought was a possibility for magazine layout.

It was only in the past three months, going through my contact sheets , I found one neglected frame of film, never noticed by anybody, never clipped, never edited, and never published, of Martin Luther King Jr., and his closest aides, heading up the marchers from Selma, on the highway behind them . Totally candid, everyone seems immersed in their own thoughts , Andrew Young, Rev Abernathy, Dr. King and John Lewis . Right behind them. you plainly see that it was only a small group of 300 marchers on the road from Selma to Mongomery Alabama, that had such a historic impact upon voting rights in America.

I was amazed that as a photographer, given that incredible situation I had shot only one single frame of film of what I saw, and that it had been lost for all these years.

I sent the photo to the New Yorker, hoping they might use the photo in this coming March for the 50th Anniversary of the Selma events, but Whitney Johnson, picture editor at the New Yorker kept asking to see more and more photos. Surprisingly I found four more images that also had never been found before, all unedited, unprinted and unpublished after all these years.

A non-violent protester laughing at a line of Alabama state troopers—an Organizer with arms raised, in Selma – Onlookers in Montgomery watching the march pass them by, and a closeup of a boy on the March clutching an American Flag

I never expected the New Yorker to use these and other photos of mine, online, and in a 12 page Selma portfolio, nor anticipated the interest that the portfolio has generated. There are moments in our history which are significant turning points and I am thankful to have been able to document one of then.”