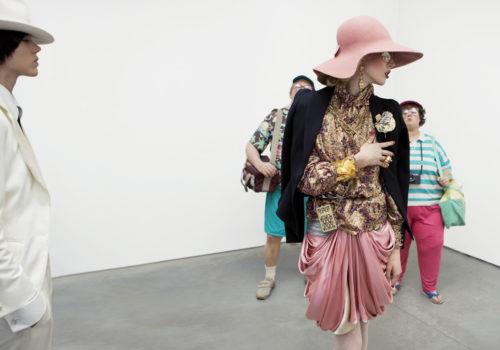 Photographers duo Inez & Vinoodh, are known for their fearless and adventurous photography that fluidly moves between art and high fashion. The Dutch, New York-based, artists are partners and collaborators whose practice moves between genres and media, pop-culture, fashion and art.

The duo has been exploring and pushing the boundaries of art and fashion photography for over three decades. In the early 1990’s they were at the forefront of using new developments in digital technology for photography, paired with a bold aesthetic sensibility, it resulted in a signature style that was to become a world-famous brand: Inez & Vinoodh.

In their work the artists do not seem to make an a priori distinction between fashion or art, instead all of their work is part of their overarching creative vision: images (or videos) that are enticing in their aesthetic perfection, that seduce the viewer, only to draw her or him into a world where a familiar narrative might just be turned upside down, becoming provocative. In an interview Inez & Vinoodh emphasise the powers at play in their images: “for us there’s always this sense of duality, there’s always a tension between the beautiful and the grotesque, the spiritual and the mundane, high fashion and low fashion, male and female.”

While always highly polished, their images critique social norms regarding gender and sexuality, undermining these conventions as well as the prejudices they bring about. Often their images are printed larger than life, enhancing their other-worldliness, The artists’ intervention of collage technique abstracts the famous star into an almost unrecognisable, ethereal muse.

This blending of techniques and their mastery of digital manipulation has had such a following in photography, becoming ubiquitous up to the point one would almost forget just how daring and cutting-edge the duo’s explorations of photography’s boundaries have been since their earliest work.

The seemingly effortless movements of the artists between editorials, videos, exhibitions, experimental montage and assemblage, are a rare thing indeed, and form the foundation for the vigorousness of the firmly established brand Inez & Vinoodh. Moreover they have created ground-breaking editorials for such publications as Vogue, V Magazine, Visionaire, The New York Times Magazine to name but a few.

Michel Lamoller 1984 typically works with photography in a sculptural and experimental way. He studied at Hamburg Academy of Fine Arts and is now a freelancing artist. Some of the photographic sculptures serve as models for a photo which becomes the final work. He uses photography as a material to create multi-layered sculptures that are on the border between being an object and being an image. By alienating the original use of photography, Lamoller revisits representation mainly because in this manner he succeeds in revealing its capacity of expanding the boundaries of the image, and he does that by being playful, conceptual, and at the same time bringing about a sense of surprise and bewilderment – going back to the basics of aesthetic experiences.

With his works, Lamoller creates, often location-specific, interventions into the exhibition space that go hand in hand with the imaginary act that is anticipated from the viewer. The boundaries of the image are stretched into different directions alluding to the aesthetic effect the viewer may experience from other media, for4 example, when encountering a sculpture, or even when engaged in a piece of moving image. Lamoller experiments with new media to find new possibilities and opportunities, but yet, he clearly refers to the tradition of photography to document reality – just that his unique artistic process does not end up in an image of reality but in objects that re-enter the with the haptic world of things.

With a background in theatre and experimental video, Nico Krijno (b. 1981, South Africa) works at the blurry intersection of photography, collage, painting, sculpture and performance. Probing the thresholds of each, his work materialises through a stream of unique and colourful abstractions that not only act as autonomous pieces of art but when seen as a collection, Krijno’s obsession and constant intrigue into the perception of photographs becomes decidedly evident.

Often working with discarded materials found in his immediate surroundings, he interprets and re-imagines them to find alternative structures for how meaning and matter are both constructed and perceived. Photographing these ephemeral structures, as he describes himself, are a private and physical performance, with the camera being the audience. Importantly, the act of photographing these theatrical scenes is only one part of Krijno’s work. Through an array of digital tools, he then re-imagines the materials, colours and forms countless times until our understanding of each photograph is constantly being challenged, always failing to remain still.

Maurice Scheltens (1972) and Liesbeth Abbenes (1970) are the sum total of a still-life photographer and the creative craftsmanship of an artist. Technical perfection added to individual handicraft, strong pictorial clarity in addition to tailor-made settings. They experiment with converting spatial dimensions into flat surfaces and explore photography’s potential for creating illusion. Essential to their work is their laboratory like studio where they construct their settings with an attitude of conceptualisation and solution-led thinking, regardless of whether they are editing or tackling commissioned or independent artistic work.

Instead of presenting objects as plain sellable products, they often manipulate and utilize them as building blocks for new compositions. The autonomous artistic quality of the photograph always has to prevail. Scheltens & Abbenes deliberately choose to operate both in the field of applied and autonomous art and use them as breeding ground for one another. This approach resulted in showing their projects in cultural institutions such as Galliera Musee de la Mode Paris, Foam Amsterdam, Huis Marseille Amsterdam, The Kunsthal in Rotterdam and The Art Institute of Chicago.

A graduate of The Royal Danish Academy of Fine Arts, visual artist Theis Wendt (b. 1981, DK) lives and works in Copenhagen. Applying a broad range of materials – both the organic and the synthetic – Wendt’s creative process combines sculpture, installation and post-photography into illusionary works that demand viewers’ careful examination. Here, materials seem to mimic others, and faint impressions of nature are conjured by digital means. As with any image, looked upon with any first glance, things are rarely as they appear.

Central to Wendt’s practice are age-old questions of authenticity; his works assert that our relationship to the world – and understandings of reality – have been significantly altered by a seismic shift in the tools with which we access it. The motif of the frame, or of the window, then, becomes a recurrent reminder of the stifling structures through which we continue to think and see. But beyond addressing the dystopian challenges we face, from ecological degradation to the ceaseless grip of capitalism, Wendt’s works maintain a romantic quality, pointing to something else on the horizon – something better, perhaps, if we can find the tools to imagine it.