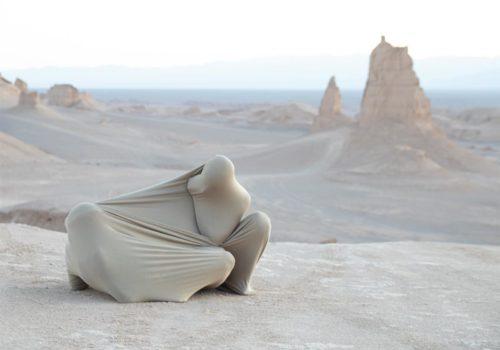 S H A F A G H is the Persian word for twilight. To photographer Klaartje Lambrechts, it’s a clear metaphor for Iranian society, and a beautiful title for her exhibition on dance and movement in Iran.

For the creation of Shafagh, Klaartje Lambrechts traveled to Iran three times between 2015 and 2019. She discovered a country with harsh laws yet unlimited possibilities. Many of these possibilities are created in a gray zone, lacking clear boundaries. A twilight zone between what is allowed and what is possible, between what catches the eye and what remains hidden. Anything that refers to dance is extremely sensitive to the Islamic Iranian regime. Most forms of dancing are simply forbidden in public. Still, Klaartje met Iranians who are passionate about dance and movement. People who dance as a way to express themselves, some even professionally. Their activities take place largely indoors under the radar. Others seek to explore what the regime finds acceptable.

In 2015 Klaartje travelled to Iran for the first time. In the capital, Tehran, she portrayed people who had turned dance and movement into passion. Black and white images straight from the dance floor alternate with seemingly classical portraits. The women stand still, dressed in accordance to the requirements of the regime. Their stories are unspoken, but visible through subtle details. In the dancers’ motion, the photographer hears an echo of Pina Bausch’s legendary statement:

‘Dance, dance, otherwise we are lost’

In the fall of 2019, Klaartje was accompanied by two dancers from Teheran to the desert areas of Dasht-e Lut and Bushehr, in southern Iran. Escaping the stifling bustle of Tehran, the photographer sought the desolate emptiness of the awesome desert landscape where she made a conceptual series amongst sand dunes, rocks and salt flats. The bodies of the dancers disappear in the fabrics that mold them. They explore, struggle and stretch their space. Captured by the camera, their contours become sculptures in the vast desert landscape, solidified movement in which the dynamics and the tension are still contained. The series portrays a wonderful image of dance and movement in Iran, and a beautiful metaphor for contemporary Iranian society, in which the same kind of tension is constantly tangible. The fabrics limit the dancers. At the same time, they offer protection to the outside observer.

Photographer Klaartje Lambrechts (1976) lives and works in Antwerp. She has shown her work at the Watou Arts Festival and at various exhibitions in Belgium, Paris, Milan and London. She works as a freelance photographer for magazines such as Weekend Knack, De Standaard Magazine, De Morgen Magazine, Le Vif, Marie Claire and Feeling. She won the Weekend Knack Award in 2011 and in 2012 she was selected for the Sony world award ‘Art & culture’. In 2016, The Guardian wrote an article about her oeuvre.