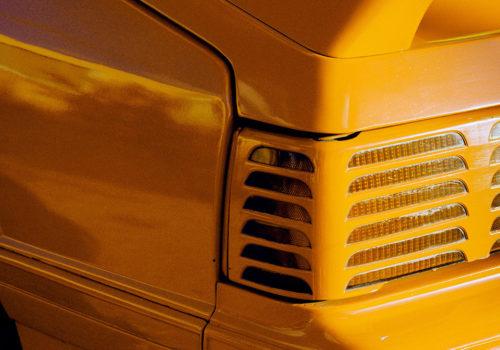 Gilleam Trapenberg
Born in 1991 in Willemstad, Curaçao; lives and works in Amsterdam, The Netherlands.

Gilleam Trapenberg (1991, Willemstad, Curaçao) moved to the Netherlands at the age of nineteen and graduated from the Royal Academy of Art in The Hague in 2017. He participated in multiple group exhibitions, such as In The Presence of Absence at the Stedelijk Museum Amsterdam (2020). In 2017 he published his first photo book Big Papi and in 2018 he was one of the nominees for the Foam Paul Huf Award. He’s the fourth recipient of the Florentine Riem Vis grant (2020). His first solo exhibition at Foam, Amsterdam opened in 2021.

Through his work, Trapenberg reflects on the contradictions that are part of the social landscape in Curaçao, were the idea of a utopian paradise is diametrically opposed to the realities of post-colonialism and tourism. He explores stereotypes and tropes that have manifested themselves through social culture and the Western media.

Erwin Olaf is an internationally exhibiting artist whose diverse practice centres around society’s marginalized individuals, including people of color and the LGBTQ+ community. In 2019 Olaf became a Knight of the Order of the Lion of the Netherlands after 500 works from his oeuvre were added to the collection of the Rijksmuseum. Taco Dibbits, Rijksmuseum director, called Olaf “one of the most important photographers of the final quarter of the 20th century”.

In 2018, Olaf completed a triptych of monumental photographic and filmic tableaux portraying periods of seismic change in major world cities, and the citizens embraced and othered by their urban progress. Like much of his work, it is contextualized by complex race relations, the devastation of economic divisions, and the complications of sexuality. Olaf has maintained an activistic approach to equality throughout his 40-year career after starting out documenting pre-AIDS gay liberation in Amsterdam’s nightlife in the 1980s.

A bold and sometimes controversial approach has earned the artist a number of prestigious collaborations, from Vogue & Louis Vuitton to the Stedelijk Museum Amsterdam. He served as the official portrait artist for the Dutch royal family in 2017, and designed the national side of the euro coins for King Willem-Alexander in 2013. He has been awarded the Netherlands’ prestigious Johannes Vermeer Award, as well as Photographer of the Year at the International Color Awards, and Kunstbeeld magazine’s Dutch Artist of the Year.