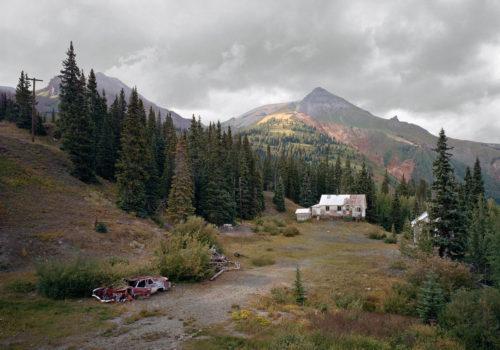 Bryan Schutmaat
At Art Rotterdam galerie van Leeuwen shows two series of Bryan Schutmaat.
The first, Grays the Mountain Sends is inspired by the poetry of Richard Hugo. It explores the lives of working people residing in small mountain towns and mining communities in the American West.
The second goes under the name County Road.
These photos were taken in rural Texas and they represent the transition from winter to spring. Most the work was made during my outings to the countryside during the Covid-19 shutdown. When I could, I liked to get out of the city during quarantine. I often drove from my home in Austin till I found some nice dirt roads, where there were forests, farmland, meadows, and flowers. I wandered, waited, looked deeply, and thought about the passage of time and nature’s indifference to humanity.

Jeroen Hofman
Whether documenting the city parks of Amsterdam and Rotterdam or the Wadden Islands, Jeroen Hofman has a particular method: he photographs from up high, standing on an elevated platform.
Jeroen Hofman (NL, 1976) studied photography at KABK in The Hague. His breakthrough came with Playground (2011), in which he photographed training facilities for the emergency services. Inspired by the work of Hans van der Meer, Edward Burtynsky and Gregory Crewdson, among others, he photographs the landscape from a high vantage point.
Slowly the role of the landscape grew. In Park (2018) Hofman captures the common space and how we all share it. Hofman also makes portraits. He has been awarded several grants and awards, including the Zilveren Camera twice: for the series Playground and in 2014 for portraiture.

Sanlé Sory
Ibrahima Sanlé Sory (1943) started his photographic career in Bobo-Dioulasso ( Burkina Faso ) the very year his country became independent from France in 1960 under the name of République de Haute-Volta. As a young apprentice working with a Ghanaian boss, he learnt to work with a photographic chamber, before processing and printing his own pictures Like many African photographers of his generation, he chose the 6×6 format. He was privileged enough to document the fast evolution of his own city, Bobo-Dioulasso, then Haute-Volta’s cultural and economic capital.
He captured the frontal collision between modern life and centuries-old traditions from this culturally rich and rural region.

Hans van der Meer
At the beginning of the 1995 football season, Hans van der Meer set out to take a series of football photographs that avoided the clichéd traditions of modern sports photography. In an attempt to record the game in its original form – a field, two goals and 22 players – he sought matches at the bottom end of the amateur leagues, the opposite end of the scale to the Champions’ League. And he avoided the enclosed environment of the stadium and tight telescopic details and hyperbole of action photography. Preferring neutral lighting, framing and camera angles, he chose instead to pull back from the central subject of the pitch, locating the playing field and its unfolding action within a specific landscape and context. In 1988 he had curated a book, Interland, containing archival images of the Dutch national team between 1911 and 1955. He was heavily influenced by the old tradition of photography in which a wide view of the action often resulted in elements of the locality being present in the image. With the addition of graphic lines, these images were then used in newspapers to illustrate the movement of the ball to the goal.