Art Rotterdam 1 – 4 July – a festive weekend for those who love art, photography, design and much more. (Part 2) 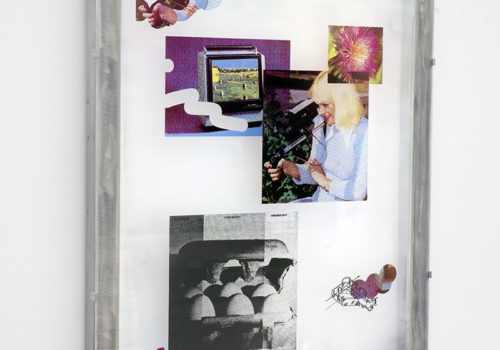 Liminal Land shows the brand new depot of Museum Boijmans Van Beuningen (Rotterdam, NL) just before the art collection will be moved in there. The world’s first art depot accessible to the general public, will be home to 151,000 works of art. Satijn Panyigay in its brief moment of emptiness just after completion. The series forms a diptych with ‘Twilight Zone in which Panyigay photographed the museum Boijmans Van Beuningen itself after its closure, waiting for a large-scale renovation

Jaya Pelupessy uses photography to investigate the photographic medium by means of diverse processes that lead to autonomous images. In his latest project “Manufactured Manual” he developed a technique involving multiple colour exposures on a silkscreen-frame. Pelupessy is transforming this tool, normally used for multiple reproductions, into a singular work. This project is aimed at making the constructions behind our visual consumption visible.

Tanja Engelberts (1987) The Netherlands
Tanja Engelberts investigates in Forgotten seas (2020) & 500 metres afar (2020) the duality between the romantic landscape and its economic reality in today’s world. In her latest project she returns to the North Sea. The harsh conditions at sea make the offshore industry almost the ultimate symbol (icon) of man overcoming nature. Artificial cities of concrete and metal in an apparently empty sea. They leave a lot to the imagination. In recent years companies have retracted their operations, the project investigates how to document a landscape that is demolished and no longer there.

Kim Boske has centered her attention on the Akui Gawa river in Tokushima, Japan. Prone to rapid rises and drops in water level, the river and the aquatic ecosystems are very closely linked to human life and culture. Positioned vertically, her new photo based work Akui Gawa demonstrates several vanishing points in the river to differentiate scenes and to suggest heavy streams of water, disappearing amidst whitish irregular areas, only to reappear as effervescent currents. With this large photography-based work of 282 cm height and 94 cm width Kim Boske has completed something that exposes moving cycles of life.

As part of the works selected by FLATLAND, Dutch photographer Ruud van Empel (1958, Breda) comes to Art Rotterdam with new work. Being one of the most acclaimed Dutch photographers, his photographic images strive for content aligned to natural reality though they carry a certain level of surrealism. Van Empel uses his last series of works of Mondo del Silenzio and Jungle to expose the true reality of the human footprint on the planet in a subtle and elegant way, making the viewer focus on the beautiful image of world, but only for a moment, before the dark side of the work starts to be apparent, leaving the viewer with a feeling of unease.

China Girls is a new series of portraits of imaginary young women made in 2018 by Valérie Belin.  Whether they feature faces, bodies, or objects, whether in black-and-white or colour, Valérie Belin’s large-format photos do more than arrest the gaze: they disconcert by introducing doubt into representation. The perfect facial features in China Girls prompt us to look but not find superlative terms for idealness. The very recognisable beauty is dissolved into a plasticity accentuated by the size of the prints, by the expressionless gaze, the overly smooth skin. What emerges is the false, the cold and even the morbid. Looking closer, these young women are surrounded by various oddities. Antique glasses, antiquities, bowls filled with flowers and fruit and even a mix of pixelated Roy Lichtenstein-like cut outs of cartoon characters; these surroundings seem to suggest a side of life and perhaps the mental state of the girl.

Nothing provided by the gallery

Kahmann gallery opened a new gallery in Rotterdam on the 26th of June – at the end of the third contribution you will find more details on this new venue.

Huub Schilte and Jacqueline Portielje intensively explore the rich possibilities of the computer as an artistic medium and have been doing so since 1994. The computer is both their photography dark room as well as a drawing and painting tool. They work without a preconceived plan or subject. They both select fragments of images from a digitalized library they have built up over the years. With their selected image fragments, they compose their own dreamworld in black and white, filled with creatures who are endlessly captivating. As such they explore the boundaries between fantasy and reality, giving it a certain surreal quality. Could the composed black and white figures exist in real life? Are they in pleasure or pain?

The unusual is often ignored or disapproved of by the public. The work of Justine Tjallinks gives expression to the fact that it is ok to be different and that this is something to be embraced and encouraged. She aims to capture the uniqueness of individuals and the diversity of human beauty. Inspired by the craft of various master painters, from the Golden Age to the Magic Realistic painters from the 20th century, her artworks feature muted colours, detailed surfaces and balanced compositions. Fashion is often used as additional means of expression. These means, corresponding with the normative idea of beauty, serve to encourage the viewer to come closer to the uniqueness of the depicted individual than he or she would maybe do in real life.

Robin de Puy’s photographs start with a desire to tell her own story through the faces of others. Whether it’s the freckled adolescent she noticed whilst refuelling in Wyoming, the Dutch author, poet and columnist Remco Campert, or the boy Randy she met in Nevada, de Puy sees the camera as an aid to understand the deeply personal traits and histories of each person, and how they also reveal something about herself.

Ruth van Beek uses the established visual codes of photography to guide viewers into a belief in the incredible rarity or importance of the shown object, even when that object is unidentifiable. From a growing archive of found photographic material, van Beek arranges images in constantly changing ways. The primary source for her odd and playful collages are specialist books and magazines of the 50s, 60s and 70s. Exercising her distinctive approach, van Beek then physically intrudes into the found images from her archive to manipulate and conceal.

Nico Krijno has a background in theatre and experimental video, Krijno works at the blurry intersection of photography, collage, painting, sculpture and performance. Nico Krijno’s latest collection of work, Lockdown Collages, were made at his farmhouse outside of Cape Town during lockdown. Hundreds of encyclopaedic images – ikebana arrangements, marble faces, kitsch household items and ornate furniture to name a few – have been sliced horizontally and stacked vertically into fantastical totem poles made from parts that refuse to be complete.

Have to be booked in advance: https://artrotterdam.com/en/

Visitors are welcome without testing | Face mask is not mandatory | 1.5-metre distance is

Tickets clearly state your starting time, but once inside they are valid indefinitely.