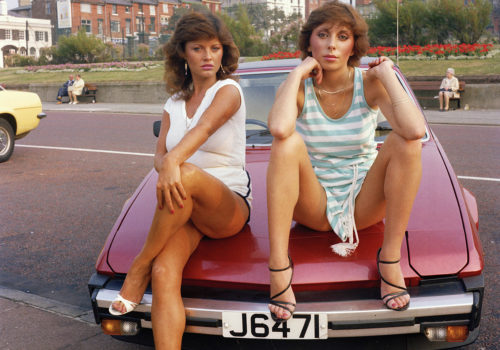 Those looking for the infinite or transcendence are unlikely to find it during bus journeys or football matches, at the Pier Head ferry terminal of the Mersey River, or in the shipyard changing rooms. As for those looking for a deterministic logic, a sociological and political statement about England, they will find here and there visual information about a specific period and place. Tom Wood enables us to escape the stereotypes that a certain British documen­tary photography has accustomed us to.

The body of work consisting of several series that are now “historical”, draws us deep into the atmosphere of Thatcher and post-Thatcher England. An ill wind had long since begun to blow in Liverpool.

And when Tom Wood arrived on the scene, it was still blowing, harshly. A succession of events, such as the closing of the shipyards, added together and repeatedly paint a coherent picture of a particular universe, of a period, a class war, of which soon only a few traces, and some remaining portraits of a rare nobility, cleared of any heroic pathos,. It has never been easy for photography to escape heroization. In its keenness to construct allegorical, hence unreal, attitudes of the human condition, photography has sometimes instrumentalised suffering and misery.

It has, in fact, underestimated the often more meaningful singularities. In the desire to affirm photographic standards, wanting to contract a “moral” alliance with a community of “modest folk”, with the “little people”, is a challenge, even a provocation. Tom Wood has risen tirelessly to this challenge, liberating photographic empathy from the purgatory in which it was vegetating.

Tom Wood, the Irishman born in 1951 (County Mayo), takes photographs almost every day. After studying fine arts at the Leicester Polytechnic from 1973 to 1976, he moved with his family to Merseyside in 1978. Fascinated by experimental cinema, he then turned to photography, learning about the medium on his own. Self-taught, he remained faithful to chemistry, paper, and the darkroom. He experimented relentlessly with technique, from the simplest to the most elaborate (from expired film to panoramic photography).

Between 1978 and 2001, he roamed the city of Liverpool and the banks of the Mersey, with his Leica 35, and painted a portrait of the city and its residents: streets, pubs, clubs, markets, building sites, parks and football stadiums. This candid portrait of the working-class populations in industrial wastelands and abandoned places form a body of work without equal in contemporary photography.

Tom Wood’s work has been the subject of several solo exhibitions around the world. In France, he has been shown in festivals, as part of the Sit Down Gallery or at the Centre photographique GwinZegal in Guingamp (2012) and the Château d’Eau in Toulouse (2005). His photographs have been included in the collections of MoMA and ICP in New York, the Art Institute of Chicago and the Victoria & Albert Museum in London. In 2002, Tom Wood received the “Humanity Dialogue Prize” at the Rencontres d’Arles.